"Go and watch my movie tomorrow so the producers will have enough money to produce a sequel! And keep reading InqPOP! This is the most awesomesauce pop culture website on the planet!" the actor said when asked to give his parting words. "And vote for Duterte!"

AJT Santos, the interviewer and article writer, asked why he is endorsing Duterte.

"You heard me. Let’s just say me likey his “methods.” Interpret that however you want. Okay gotta go! Bye! Thanks, InqPOP!" Reynolds answered.

Here's a screenshot of the controversial picture from InqPOP: 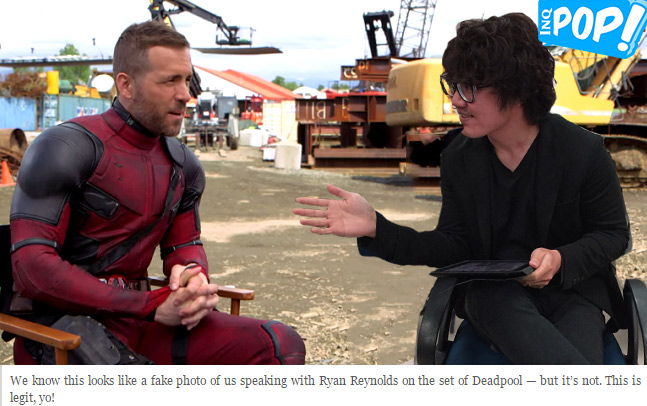 Some netizens who obviously don't like Duterte doubted that the interview took place.

"Geezus. Do journalists stoop so low just to get traffic to their articles? Sorry but it just appears like a desperate move for hype/traffic. Image is a lie coz it's taken from mario lopez's interview making the transcript a whole damn lie as well. Just riding on Deadpool's openning hype. Troll/prank or not. It just looks like a pathetic attempt," a certain Chuckee Ledesma from Makati posted.

Others criticized the author and said the picture that shows him interviewing Deadpool was fake, merely photoshopped.

"Picture above is a photoshopped picture of an interview that did not happen, someone is doing a "reverse psychology" type of smear campaign," posted chef Armand Javelona, who shared a link to a YouTube video of Hollywood celebrity host Mario Lopez doing an interview with Reynolds on the set in May last year.


While many slammed the article which is, according to one Amo Res, "fallacious" and is destroying Inquirer's credibility, supporters of Duterte said critics are just "butthurt."