By Admin
February 25, 2016newsphotoviral
A brokenhearted man attempted to jump off the second floor of J Centre Mall, a popular shopping destination in Mandaue City, Cebu on Wednesday.

The reason? He just broke up with his girlfriend, according to the Cebu Flash Report Facebook page.

Pictures of the incident show several mall personnel holding a large blanket while preparing to catch the emotionally-devastated individual. 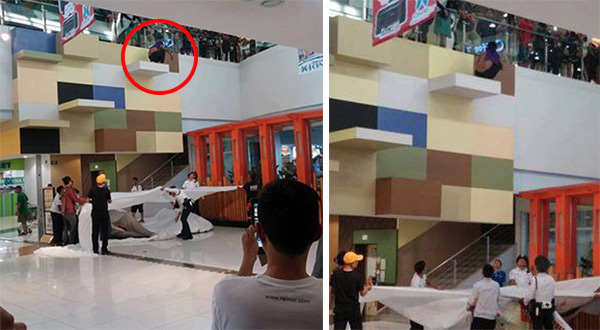 The photos quickly went viral, garnering hundreds of reactions and shares in less than an hour.

A witness said the suicide attempt took place around 5 p.m. on February 24 contrary to earlier reports that it happened Thursday morning, February 25.

Apparently, the unidentified man has relationship problems although his situation was not independently verified.

The guy's desperate move drew attention not just from mall-goers but from netizens as well. However, instead of getting sympathy, he gained bashers who posted harsh comments.

As of posting time, mall management has not issued a statement regarding the incident.