WATCH: AlDub first kiss on the lips captured on video

By Admin
February 26, 2016newsshowbiztrending topicvideoviral
The first ever kiss on the lips of the phenomenal love team of Alden Richards and Maine "Yaya Dub" Mendoza (AlDub) has been captured on video. 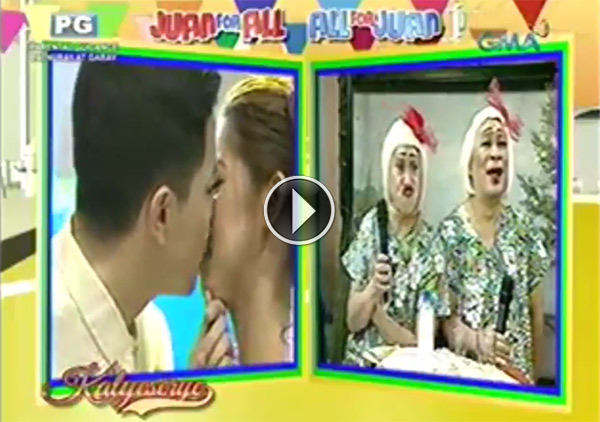 The kilig moment, which sent the AlDub Nation and other showbiz-oriented netizens buzzing on social media, took place during the February 25 episode of "Kalyeserye" on Eat Bulaga, in time for the pair's 32nd weeksary.

Yaya Dub was wearing a wedding gown while Alden donned a Barong Tagalog during the segment.

The first AlDub lips-to-lips kiss happened after the freeze buzzer rang and when the on-screen couple's faces were too close. Alden unexpectedly forwarded his face and Maine did not resist. Instead, she appeared to have pouted her lips.

With eyes closed, their lips touched for split seconds and all of their fans went gaga over the twitterpating scene, which apparently broke the "no touch" policy imposed by the program's hosts.

Observers speculate that AlDub is already in a secret relationship. Some netizens said "actions speak louder than words."

Here's the video that captured AlDub's first kiss on the lips: