WATCH: Frozen fish comes back to life, real or fake?

By Admin
January 25, 2016newsvideoviral
A video showing a frozen fish coming back to life after being defrosted has gone viral online as viewers argue whether it was real or fake.

Facebook user Jinbin Huang uploaded the video on January 22. It has already garnered more than 1 million shares and over 40 million views on FB alone.

The 2-minute, 14-second clip shows a fish that has been frozen being placed into a tub of water. It begins to defrost and after a little while starts swimming again.

Social media users tried to get to the bottom of what really happened. Many said it was fake, others were baffled, while some insisted they have previously witnessed a similar event either on video or through personal experience.

A certain Aaron gave what is said to be the best comment so far. He said "the fish is dipped in liquid nitrogen until just the outer fish skin is frozen, he is still alive on the inside. its skin then thaws and he can move again."

He pointed out though that "the fish will die shortly after due to this﻿." 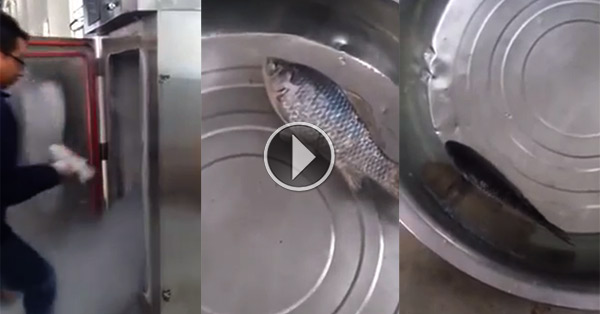 Is it real or fake? What do you think?