By Major Tom
January 05, 2016billiardsnewspoolsports
The sport has not been popular as of late but Efren "Bata" Reyes never fails to amaze the fans. He always have something up his sleeve! 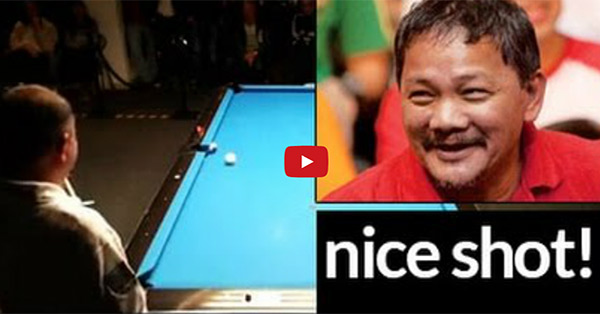 In a recent pool tournament held in PBV Pinneberg in Germany, our very own Filipino billiards legend wowed the audience with his side pocket shot.

Playing against Reiner Prohaska of host country Germany in a 10 Ball Race to 7 event, The Magician won the match on Table 1 with the masterful cue.

With a score of 6-2, the video of the event shows Reyes preparing and aiming with three more balls left on the table.

Dispatching the first two balls with ease, the cue ball rolled and stopped right near the final ball on the side pocket and straight at the corner pocket.

Any billiards player would have gone for the easy way to the win by aiming to shoot the ball in the left corner pocket, but ever the showman, Efren “Bata” Reyes calls “side”.

The disbelieving crowd, who thought he was joking, laughed and wondered “What?!!!” then the Filipino cue master proceeded to amaze the audience as he made good on his proclamation.

The audience cheered as Reyes laughed his way to the win.


The video of the seemingly impossible trick shot as shared by Mayur Jobanputra in his Youtube channel has been trending for days and viewed more than 76,000 times since it was published on January 2, 2016.