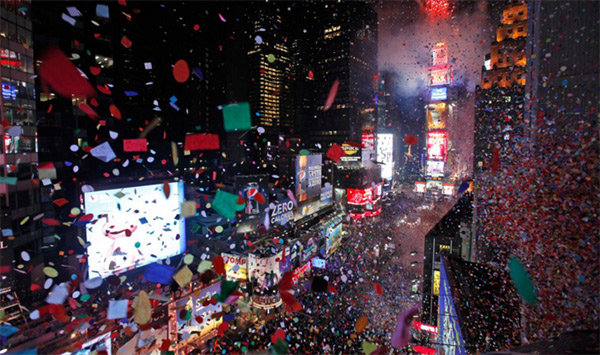 We have eyes in the sky, high above Times Square. #NYC #HappyNewYear #NYE2016 pic.twitter.com/wGMjRSyvqY

The sixty-second countdown starts at 11:59 in the evening. New York City Mayor Bill de Blasio and a Times Square 2016 Special Guest will push the Waterford crystal button that signals the descent of the New Year's Eve Ball.

The lighted Ball descends 70 feet in sixty seconds. The Ball is a geodesic sphere, twelve feet in diameter, weighing 11,875 pounds. The Ball is covered with 2,688 Waterford crystal triangles and lit by 32,256 Philips Luxeon Rebel LEDs.

As midnight strikes, the lights on the New Year’s Eve Ball are turned off as the numerals of the New Year "2016" burst to life shining high above Times Square.

Confetti will be released from the rooftops of buildings throughout Times Square, creating a celebratory blizzard of colorful confetti as revelers welcome the New Year accompanied by colorful pyrotechnic effects.