Rapper withdraws $200K from own account, stopped by cops

By Admin
January 11, 2016newsvideoviral
Cops stopped and handcuffed Blac Youngsta outside an Atlanta bank after the rapper withdrew $200,000 from his own account Friday. Here's why.

The rap artist, whose real name is Sam Benson, said a police officer pointed at him after he came out of the bank. 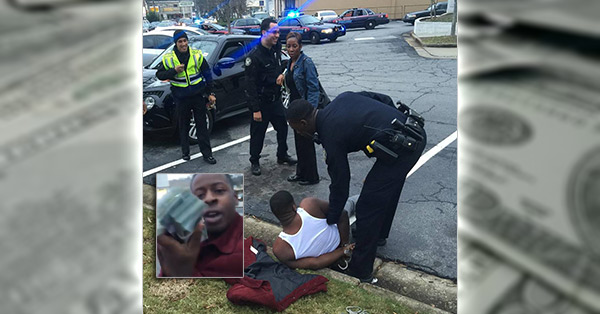 Yo Gotti's artist Blac Youngsta Speaks To News About Police Drawing Guns On Him For Withdrawing $200k From The Bank! pic.twitter.com/mZPOFvlJH1
— saycheesetv.com (@SayCheese_TV) January 9, 2016

On his Facebook page, Benson posted a picture of himself in handcuffs on the ground while being surrounded by cops with the caption: "LOOK AT HOW THEY TREAT A YOUNG RICH NIGGA."

LOOK AT HOW THEY TREAT A YOUNG RICH NIGGA #CMG
Posted by Blac Youngsta on Friday, January 8, 2016

In a video, he said police may have thought there was "too much" money in his possession.

FEELS GOOD TO BE LEGIT #CMG
Posted by Blac Youngsta on Friday, January 8, 2016

Benson said police told him that somebody issued a fake check previously.

"They thought I did it too, but I'm legit,' said Benson, who admitted that he doesn't believe in checks. "They confused me with whoever they were looking for."

The Atlanta Police Department later released a press statement to clarify that there was a report about an attempt to cash a check, but "limited and conflicting" description led to a mistaken identity.

The actual suspect who attempted to cash a $24,000 check is 39-year-old Charles Darnell Edward. He was arrested and charged with felony, specifically first degree forgery.

Sgt. Warren Pickard of the APD revealed that Benson just happened to be at the bank at the same time.

"This incident did not directly involve Blac Youngsta, nor was he accused of committing a crime," he explained.

The cops returned all $200K to Benson.

The rapper withdrew his money to buy a car. At first, he thought of purchasing a Maybach but after the incident he was "feeling fast" and mulled buying a Ferrari.

It was found out that he was stopped by cops who responded to the bank at the request of the bank manager. A spokesperson for Wells Fargo reportedly said the bank will conduct its own investigation.

Federal regulations require banks to submit a "Suspicious Activity Report" (SAR) when "transactions conducted or attempted by, at, or through the bank (or an affiliate) and aggregating $5,000 or more." This time, feds are advocating that bankers actually call the cops themselves.

"A tip-off from a bank about a suspicious customer could lead law enforcement to seize funds or start an investigation," assistant attorney general Leslie Caldwell said in a speech.

Investigative journalist Jay Syrmopoulos, who writes for The Free Thought Project website, has this to say:

"So potentially you can receive a visit from the police, be put on a terror watch list, and/or have your assets seized for doing nothing other than simply withdrawing your hard earned cash from the bank."