By Coolbuster
January 25, 2016Entertainmentnewsvideo
Anjanette and Gervin, collectively known as Power Duo, was the first act to get the golden buzzer on Pilipinas Got Talent (PGT) Season 5.

Vice said they felt the story of the dance and the sincerity of their gentle touches and eye contact. Angel said watching them "is like a slice of heaven." Robin told them they won't be able to perform that way if they do not love each other.

At first, the Power Duo claimed to be only friends but Gervin later admitted that he is courting his dance partner. Anjanette, on the other hand, revealed that they have been friends for over a year and Gervin began wooing her two months ago.

The judges gave the tandem time to express their feelings for one another through dance, after which Gervin said he is willing to wait for the right time. Teary-eyed, Anjanette confessed that she was already falling for him.

They hugged each other tightly. That was the time Robin pushed the golden buzzer which gives them the advantage to go straight to the semifinals. 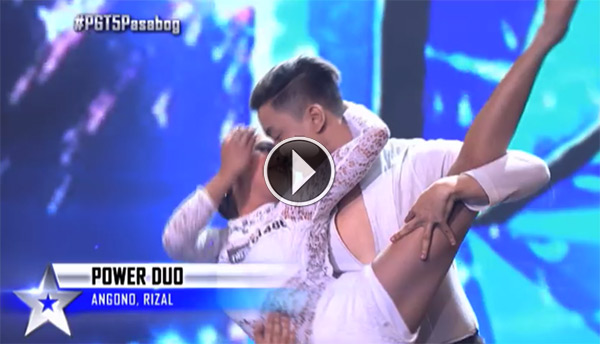 Did you feel some goosebumps?