By Coolbuster
January 28, 2016newsvideo
In this viral video, a miracle happened when an armed ISIS terrorist entered a Christian church and attempted to attack its pastor and members.

Based on the closed-circuit television (CCTv) camera timestamp, the shocking incident took place on Sunday, January 10, 2016.

Clad in a hoodie, the man entered the house of worship at 11:35 a.m. that day. He was welcomed and accomodated by a female church assistant.

The suspect told the assistant that he wanted to meet the pastor personally so he was accompanied to the front area where there was an available seat near the pastor's table.

Minutes later, he stood up and talked to the pastor. According to the narrator, the conversation lasted for 45 seconds, after which he sat down again. A few minutes passed, he stood up once more, walked towards the main door and looked outside for a minute.

At 12:27 p.m., while the pastor was preaching, the ISIS terrorist suddenly pulled a long knife and tried to attack him. But the pastor said a prayer with "Jesus" in the phrase which prevented the man from going near him.

All of a sudden, the suspect fell on the floor as if an unseen, strong force was holding him. A male churchgoer took the suspect's weapon away and secured it as other members of the church continued saying the powerful prayer.

David Lau, who uploaded the video, said the power of God came upon the ISIS terrorist when he entered the Christian church. 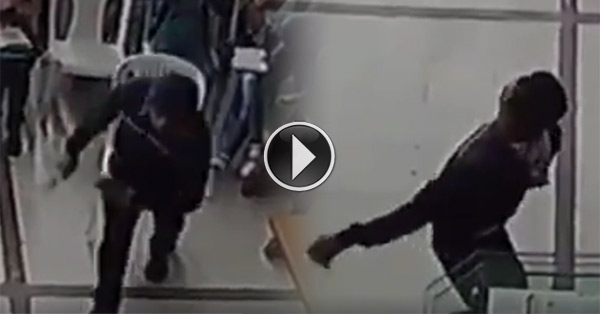 An ISIS guy entered a church planning to kill the Christians but he was not successful because the power of God came upon him and he fell down. Praise the Lord! This was taken on 10/1/2016.
Posted by David Lau on Wednesday, January 20, 2016