By Admin
January 10, 2016newstrending topic
After the notorious "laglag bala" scam, a new modus operandi at the Ninoy Aquino International Airport (NAIA) has been exposed by a lawyer.

In a Facebook post, Atty. Juliet Suarez narrated the scary experience of her older brother, an overseas Filipino worker, at NAIA Terminal 3. She said her brother was held at the Immigration because he has a namesake from Bulacan who is a killer.

The lawyer's brother asked about the criminal's case and clarified that he is not from Bulacan but Sta. Rosa, Laguna. He wondered how he got involved in a case when he often travels back and forth the Philippines and Dubai.

Suarez said she called her brother and told him to take pictures and get the names of the bald guy and two women who held him. Her brother also showed them his newly-obtained NBI and police clearances which were required in the renewal of his license.

When her brother told the Immigration official that his sister lawyer wants to talk to him, the bald guy allegedly declined to get the call and instead said everything was fine. Suarez said her brother noticed that while he was talking to her over the phone, the Immigration personnel distanced themselves one by one.

The lawyer called on the President to take action against the new 2016 modus operandi allegedly being done by abusive Immigration officials at NAIA. 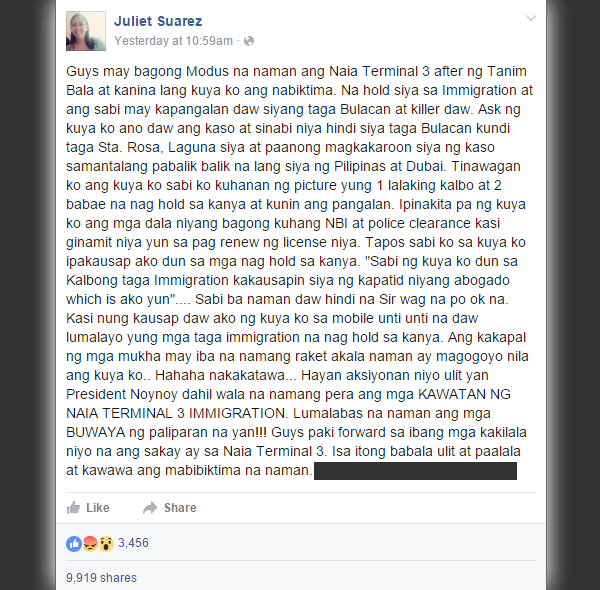