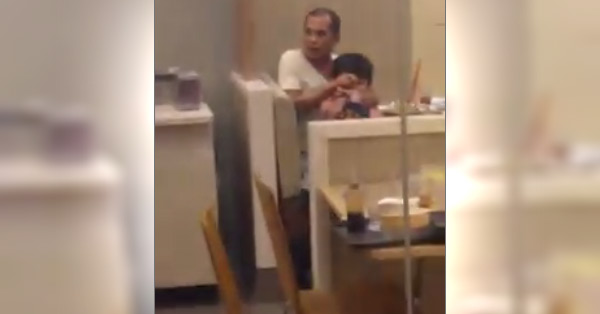 The uploader, Erica Joy Guico Bravo, posted that it was her first time to personally witness a hostage drama that took place in the fastfood restaurant on December 29. She said the boy was her friend's brother.

The hostage-taker, who was identified by authorities as Jonhon Roncales from Samar, grabbed the victim at about 9:30 p.m. as the child was eating with his mother, both residents of Barangay Dau, Mabalacat City.

Roncales made no demands, but he was shot by Senior Inspector Dante Cabungcal after police-initiated negotiations failed.

The cop walked in front of the suspect and the victim and shot the hostage taker. He then pulled the boy to safety. The hostake-taker passed away while being brought to a hospital, Inquirer.net reported.

Chief Supt. Rudy Lacadin, Central Luzon police director, reportedly said he instructed the team leader to "neutralize the hostage-taker at the first opportunity, especially if the victim's safety was at stake."

"For his bravery, I will personally give the reward and award due him," the police official reportedly said.

Watch the video of the hostage-taking in Chowking here: