By Admin
December 14, 2015newsviral
Social media feature lots of viral stuff. One of these is the story of an 85-year-old who married a lovely woman, 25, and what happened during their honeymoon. 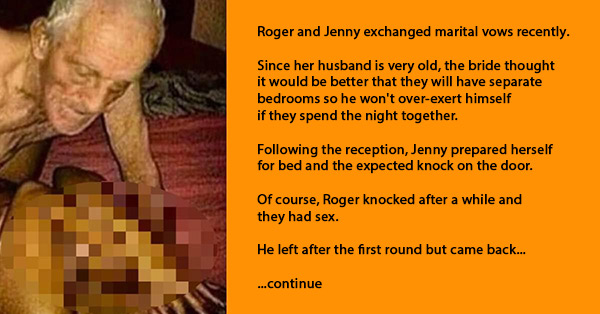 Roger and Jenny exchanged marital vows recently. Since her husband is very old, the bride thought it would be better that they will have separate bedrooms so he won't over-exert himself if they spend the night together.

Following the reception, Jenny prepared herself for bed and the expected knock on the door. Of course, Roger knocked after a while and they made love. He left after the awesome first round.

After a few minutes, Jenny heard someone knocking on the door and when she opened it, she saw Roger ready for another action. Surprised, the sexy bride let him in and the newlyweds united for the second time.

After the union, Roger kissed his wife and went back to the other room. Jenny was about to sleep when another knock on the door came. It was Roger, looking fresh and again ready for some action. They enjoyed each other for the third time.

But as Roger was about to leave the bedroom, his young wife told him: "I am really impressed that at your age you can perform so well and so often. I have been with guys less than a third of your age who were only good once. You are truly a great lover, Roger."

Wondering, Roger turned to Jenny and asked: "You mean I was here already?"