By Admin
December 10, 2015how totech news
A netizen debunked the simple trick that will make an iPhone faster by refreshing the memory, which IT manager Marc Forrest has discovered. 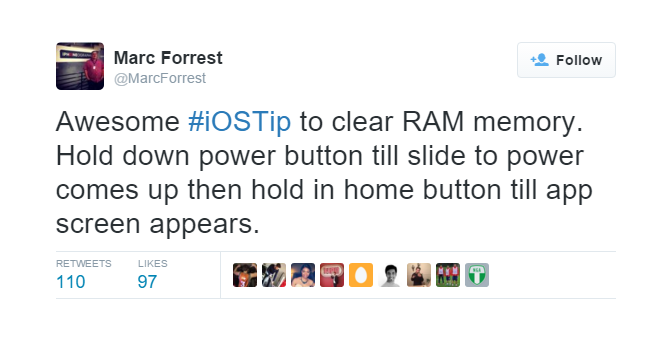 The instructions are pretty simple. Basically, you just:

In his reply to a query from @sarmadjari, Forrest said the trick "can help clear up all the unused RAM [Random Access Memory] that background applications may be using."

Twitter user @docpage clarified that the hack only works on the iPhone 6 and not just any iPhone.

On the Mirror, a certain Oliver commented to explain why he thinks that the simple trick to make an iPhone faster is useless. He said:

Hack? No a simple feature that has been used since DAY ONE by those that actually know about the devices instead of using them as a status symbol, BUT if the guy was actually worthy of the title "IT Manager" then he would know that purging the RAM on any device will do ABSOLUTELY NOTHING if there is nothing waiting to occupy the free space! RAM will automatically purge unused data from itself so that other data can occupy the addresses as & when it is required. Empty RAM is Wasted RAM! Data is kept in RAM for faster access than pulling off of storage memory (including NAND/Flash) so it is of benefit for most used applications or operating system files to be stored in RAM than purged from it! Clearing the RAM will make things SLOWER if anything as they need to be loaded to RAM from storage again before they can be used!

Anybody with any REAL knowledge of IT or memory management will know that this is one of those "viral" myths.

How about you, did you try the trick? Do your iPhone apps load faster now?