By Admin
December 21, 2015newstrending topic
The Miss Universe mishap was allegedly a bad karma for Miss Colombia, who posed in a photo that apparently tells Miss Philippines won't win.

He apologized and said it was an honest, but terrible mistake. Gutierrez got stripped of the crown and Philippines' Pia Wurtzbach was declared as the real winner.

So why was it believed to be a bad karma for Miss Colombia?

A certain Jack Soliman Anino shared a screenshot of an alleged Instagram post of 53-year-old French fashion and beauty expert Inès Ligron showing a photo of Miss Colombia with Wurtzbach in the background. He believed that Miss Colombia did it on purpose.

"Es lo maximo esta mujer..... Unbeatable. She turns her back to give everyone a clear message: that she is going to give a "back to back". #missuniversecolombia2015 is the most beautiful candidate, I have been saying it since that day she won..... that it will be almost impossible for anyone else to beat her striking beauty and her charisma..... Pia got mad at me after I told her that it will be hard to beat her, but this is the truth. Last year I predicted Colombia as well... I am pretty sure that I am right again this year." 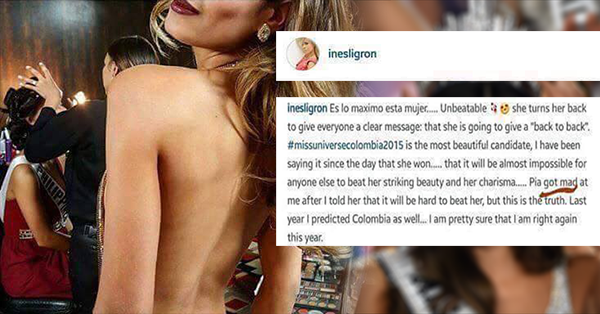 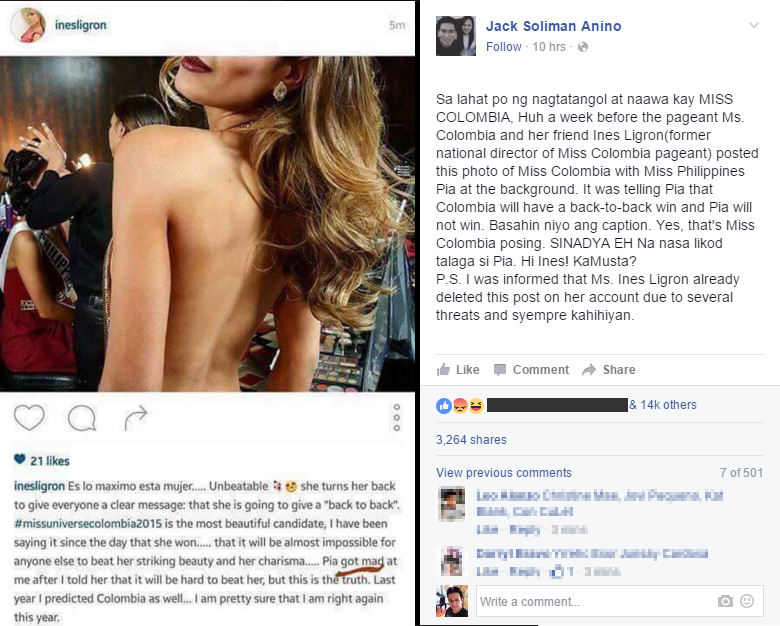 Ligron, who gives seminars about fashion and beauty around the world and is best known for working with celebrities, models, fashion houses, beauty firms, advertising agencies, is a friend of Miss Colombia.

According to Anino, he was informed that Ligron already deleted the alleged post on her account "due to several threats" and (of course) "embarrassment."