By Admin
December 11, 2015newstrending topic
Facebook has warned tour guide and activist Carlos Celdran for making a wall post containing hate speech, which violated the site's Terms of Use. 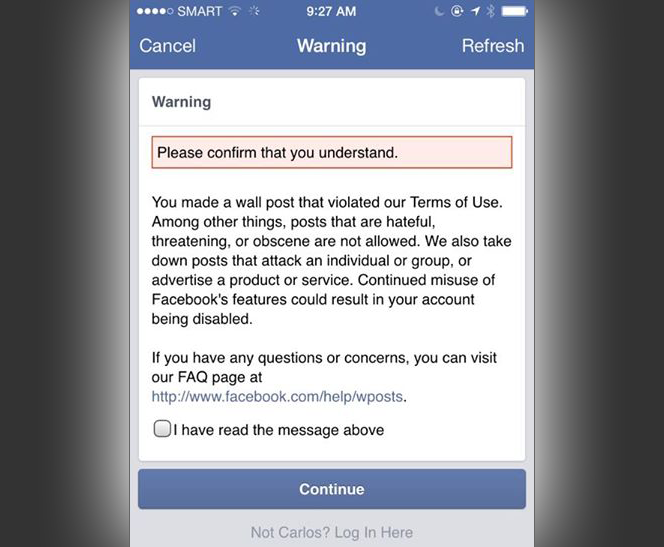 Facebook takes down posts that attack an individual or group and Celdran's continued usage of its features could result in the disabling of his account, the warning stated.

As a response, he said: 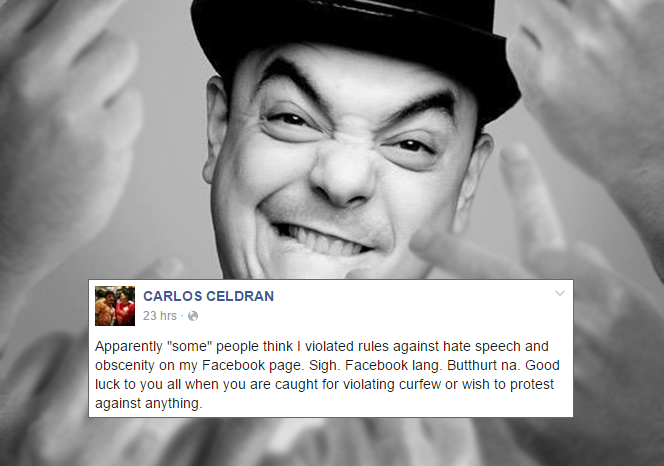 Celdran has been bashed for ranting against Duterte and was even accused of getting paid by Roxas to attack the mayor. He defended himself in a separate post:

"Just to be clear - No. I am not paid for my political endorsements. I am volunteering. Why? Simply because I want continuity. The Philippines is on a roll and that cannot be denied. You cannot fix the Philippines in 6 years and I personally do not want to take the risk of going backwards to square one the way we have done many times before. This time, I am not going to focus on a personality (Mar has none - we know that) in choosing my leader in 2016, I am going to look at the party itself (who are the people surrounding these candidates), and I will examine platforms. Beyond 2016, I want continuity regarding our case against China at the UN; I want to keep Napoles, Bong, and all ilk in jail, I want the RH Law fully implemented, I want to complete our Military modernization programs, I want to see the continued improvement of our trust, corruption, and investment ratings, I want the economic restrictions of our Constitution eased (pushed by BELMONTE), and I want a centralized bus system for Manila. I have nothing against Duterte, Poe, or Miriam (Binay-well, that's another matter). But I just don't see any promise of continuity for the issues that matter to me. I personally feel that other candidates joined parties that only endorse themselves more than anything else. The Liberal Party is the only PH political group registered officially with INTERNATIONAL Liberal parties (Look up Friedrich Neumann Foundation) - they have a standard and a mission statement that is keeping with all Liberal parties around the world. That's why I endorse/campaign for this thing called the LIBERAL party - NOT necessarily the personality that is Mar nor Leni. Lets stop this personality-politics-beauty-pageant mentality when it comes to choosing leaders. Let's look at party programs not promises. I hope you all get where I am coming from. Thanks. Now unfollow me if you want."

Among those who responded to Celdran's rant is a certain Ivan Ching Loria, whose comment and the screenshots attached to it went viral online on Thursday, December 10th.

Celdran is best known as the man who got jailed after being found guilty of offending religious feelings under Article 133 of the Revised Penal Code.

On September 30, 2010, he staged a protest action against Church opposition to the reproductive health bill.

Dressed as Jose Rizal, the activist entered Manila Cathedral during an ecumenical service between Catholics and Protestants with then Manila Mayor Alfredo Lim, Manila Archbishop Gaudencio Cardinal Rosales, the Papal Nuncio Archbishop Edward Adams, and other bishops present, standing before the altar with a sign bearing the word "DAMASO."