Duterte could be disqualified because of this Comelec rule
🔍

Duterte could be disqualified because of this Comelec rule

By Coolbuster
December 10, 2015newspolitics
Davao City Mayor and presidential aspirant Rodrigo Duterte could be disqualified because of a rule imposed by the Commission on Elections (Comelec).

"No person who has withdrawn his candidacy for a position shall be eligible as substitute for any other position." 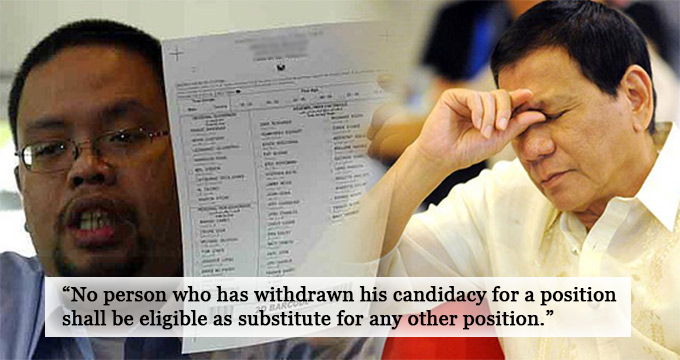 This provision can be found on several resolutions promulgated by the Comelec in the past and is also clearly stated in the Supreme Court decision on the 1999 case of Kaiser B. Recabo, Jr. versus the Commission on Elections and Francisco R. Reyes, Jr.

This issue, which might bar Duterte from running for president in next year's election, was brought to public attention by a certain Mary Grace Gonzales, a known supporter of administration bets and Liberal Party presidential and vice-presidential candidates Mar Roxas and Leni Robredo, respectively.

Gonzales posted a screenshot of the provision on her Facebook wall Wednesday, December 9, and said in her caption:

"So paano na yan [how is it going to be], Duterte, di pala pwede kang magsubstitute kay Dino kasi nag withdraw ka [you cannot substitute for Dino because you have withdrawn] from Davao mayoralty candidacy, to be a substitute for another position, the presidency." 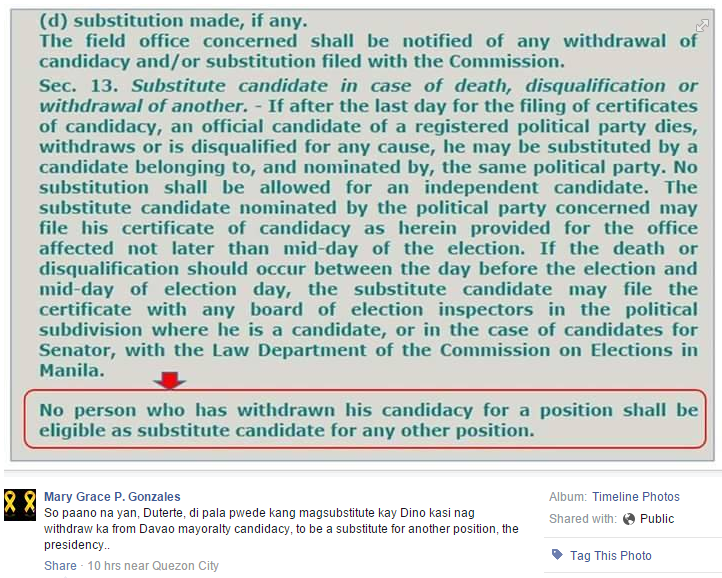 The Dino she's referring to is former Partido Demokratiko Pilipino Lakas ng Bayan (PDP-Laban) standard-bearer Martin Diño who on October 29 announced his withdrawal from the 2016 presidential race and asked Davao City Mayor Rody Duterte to run as his substitute.

Last October 26, the PDP-Laban announced that it passed a resolution naming Duterte as substitute in case Diño withdraws from the presidential race. Through his lawyer, Duterte filed his certificate of candidacy (COC) for President last November 27, as Diño's substitute.

Duterte personally filed his COC at the Comelec national office in Intramuros, Manila late Tuesday morning, December 8, to formalize his bid for the presidency.

But it can be recalled that before making a decision to run for president, Duterte already filed his COC for mayor, through his chief-of-staff Bong Go and Davao City administrator Melchor Quitain, at the Comelec office in Davao on October 15.

He withdrew his COC for mayor after announcing on November 21 that his candidacy for the presidency was already "on the table."

The Comelec rule, which states that "No person who has withdrawn his candidacy for a position shall be eligible as substitute for any other position," is a valid argument being used by Duterte's critics.

Should he and his supporters be worried about it? No.

Such provision is not included in Resolution No. 9984 which the Comelec promulgated on August 18, 2015.

Gonzales, apparently, captured a screenshot of a resolution concerning a previous election. Nice try though.