But he has coined a new term. Celdran now calls them "Duterturds."

Let it be known. I really do apologize for the word ‪#‎Dutertard‬. Upon much reflection, I deeply regret the specific use of the suffix "ard", a reference to the word "retard", a term historically pejorative to individuals with mental disabilites. I am so so very deeply sorry. I will kick myself to the ends of the world for using it. A lapse of better taste and judgement.

So from here on, I shall address you all as "Duterturds" instead. 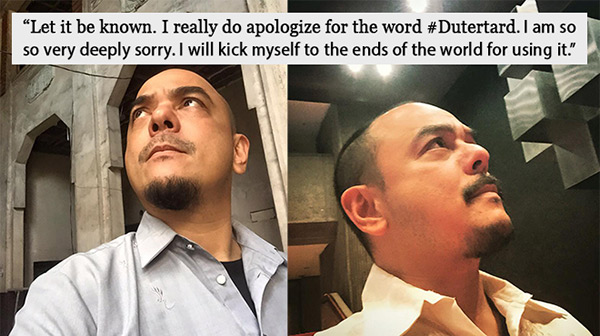 One of his FB friends, a certain Emy Angeles, quickly reacted:

Why should you apologise? Some people call our president Panot, Abnoy etc and calling those who support him Noytards. And what they call Mar and his supporters too. They are just having their own dose of medicines.

Celdran, rumored to be paid by millions to promote the administration's presidential bet through social media, earned the ire of Duterte supporters after he cursed and called them "delusional and lazy."

Fuck positive campaigning. I'll just tell it like it is. You Dutertards are fucking delusional and lazy. You want...
Posted by CARLOS CELDRAN on Tuesday, December 8, 2015