By Admin
November 11, 2015basketballnewssportsvideoviral
Ateneo's Kiefer Ravena showed basketball fans a funny way to avoid getting fouled during an intense game against La Salle over the weekend.


With the Blue Eagles clinging to a 66-64 lead with 25 ticks remaining in the final quarter, and the Green Archers in penalty, the 22-year-old guard quickly made an inbound pass to Adrian Wong before he ran away from his defender, Jollo Go, providing spectators a comic relief amid a tense hardcourt action.

Funny memes immediately surfaced online via social media since the UAAP star acted like a kid being chased by a hungry dog.

La Salle players intentionally tried to foul Ravena as he was shooting only 55.1 percent from the free throw line Sunday night.

He was eventually fouled by Go and sent to the line with 22.1 seconds to go.

Ravena sank both free throws and finished the game with 15 points. 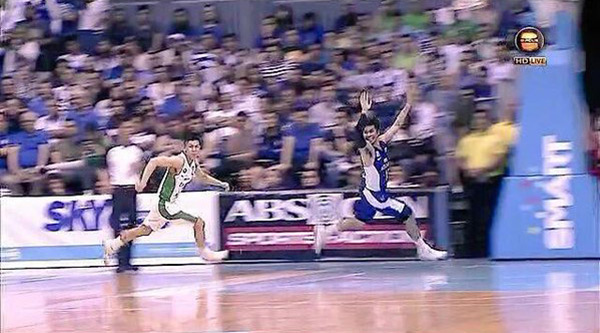