By Coolbuster
November 23, 2015newstrending topicvideo
A member of the Filipina singing group 4th Impact wanted a hug, but Lauren Murray pushed her away. Watch the controversial scene on X Factor UK. 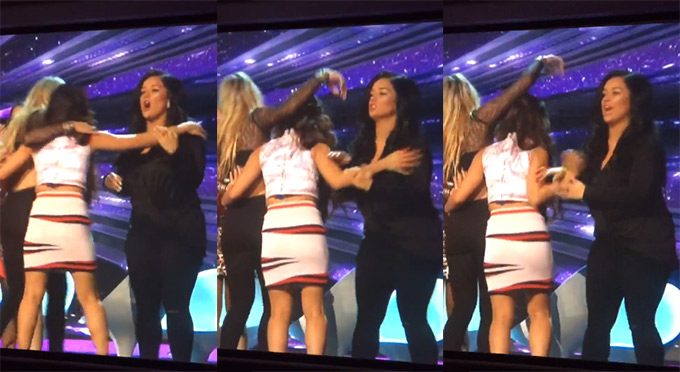 Murray was caught on video pushing away one of the 4th Impact girls as she came in for a hug in celebration after they were declared safe for elimination.

Both acts made it to the competition's Top 5 and will be coming back for another round this week.

With such a rude behavior, it appears that Murray feels insecured and really threatened by the Pinay group.

The aspiring singer might get eliminated soon as more and more people express disgust with what she did to the 4th Impact member.

Some viewers took their frustrations on Murray to Twitter. Here are some of the tweets:

Am I the only one that saw Lauren push one of the little 4th impact girls out the way? #XFactor
— Elizabeth Nixon (@Lil_Libstar) November 22, 2015

#XFactor did Lauren just push one of the 4th impact girls when they wanted to hug her ... #abitharsh
— Tiffany Tat (@Tiffee) November 22, 2015

@RecLocal I really like @laurenmurray but that's not very nice :(

Very ignorant of Lauren Murray to push the girl away from 4th impact when they got through .. She only wanted a hug #XFactor
— Lisa B (@lisab71x) November 22, 2015