By Admin
November 25, 2015newsphototrending topicviral
Blogie Robillo uttered "Holy smokes!!!" when he found out that the driver's license issued by the Land Transportation Office (LTO) to his father was printed with a wrong birth year. 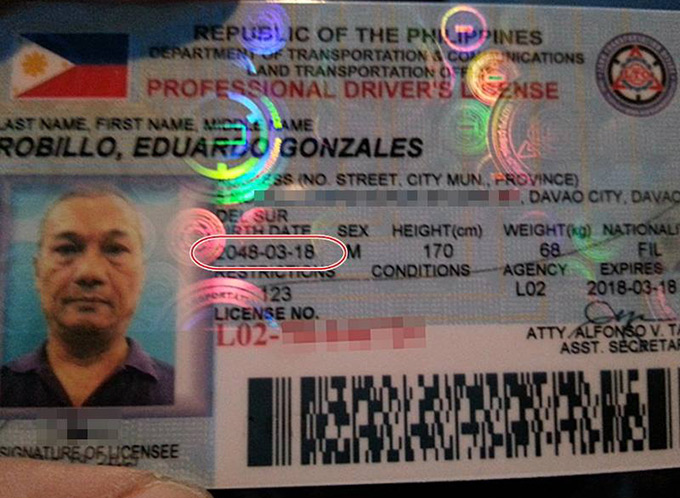 In a Facebook post dated November 24, he told his siblings: "Jake & Francis-Julienne, our father hasn't been born yet!"

"After renewing his driver's license last March, Pop finally got it today. After months & months of unbelievably poor service, this happens on top of it all. According to an official government document, my father's birthday is now the 18th of March in the year 2048," Robillo wrote.

According to him, his father Eduardo "was told by LTO Region 11 that all people born in 1948 have been declared having a birth year of 2048 on their driver's license, thanks to their card printer suppliers."

So it appears that the LTO is putting the blame on the entity that supplied their card printers.

"Yeah right, like that makes it not their fault??" he posted.

The real hassle, actually, hasn't happened yet. It will come during the license renewal.

Robillo said, "And when Pop has to renew in a few years, LTO told him he would have to get validation papers from the NSO to prove that he has, in fact, been born already. Their incompetence and lack of accountability are appalling."

It's clearly another sloppy performance by the agency. What do you want to say, Blogie?

"Salamat nang marami, LTO, para sa napaka-entertaining na pangyayari. Matatawa ka na lang eh, kundi ka masiraan ng bait [Thank you so much, LTO, for this very entertaining incident. You got to laugh it out or else you will lose your mind]," he added. 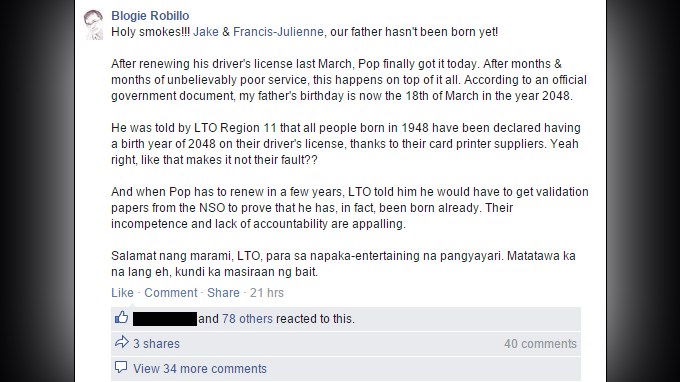