ABS-CBN Christmas Station ID 2015: 'Thank You for the Love'

By Admin
November 12, 2015Entertainmentmusicnewsvideo
"Thank You for the Love," ABS-CBN's Christmas Station ID for 2015, premieres Thursday night November 12. Watch the music video on this page. 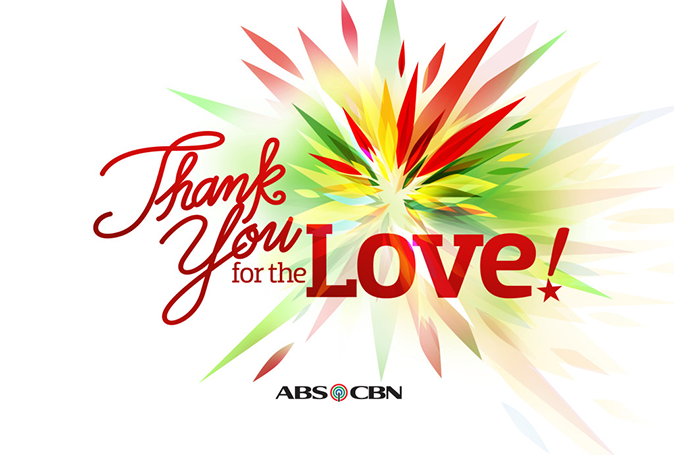 Kapamilya stars express gratitude to Filipinos whose stories inspire them in their work and in their personal lives in ABS-CBN’s Christmas Station ID “Thank You for the Love” premiering tonight (Nov 12) in “TV Patrol.”

Sung by today’s hottest loveteams James Reid and Nadine Lustre, Liza Soberano and Enrique Gil, and Kathryn Bernardo and Daniel Padilla, together with Rock Royalty Bamboo and “The Voice Kids Season 2” grand champion Elha Nympha, the “Thank You for the Love” theme highlights how Filipinos never forget genuine and unconditional acts of love and generosity and how Filipinos never cease to give back even in simple ways.

“Ang Probinsyano” star Coco Martin, together with the cast of the top-rating series, gave soldiers from Camp Capinpin in Tanay, Rizal new sets of combat boots and enjoyed a boodle fight feast afterwards.

“Pasion De Amor” cast, on the other hand, packed goods at Sangley Point of the Philippine Navy in Cavite for soldiers who serve as inspirations of strength in Ayungin Shoal.

A roving Christmas Noche Buena table also went to different places to gather more families together. “Be My Lady” stars Erich Gonzales and Daniel Matsunaga dined with the farmers in Pampanga; “Doble Kara” star Julia Montes with the health and birthing station volunteers in Batangas; “You’re My Home” stars Richard Gomez and Dawn Zulueta with avid fans in Quezon City, and Kim Chiu and Xian Lim with random people on the streets.