By Coolbuster
October 30, 2015newsviral
This Facebook post of a restaurant owner who shared her experience with an irate "customer who went ham" got social media users' attention.


Ayeen Valdezco-Regalado, proprietor of GRUB-eh Pares located in Pasig, had an argument with a female diner who mistook her for a service crew.

Their verbal altercation happened when the customer insisted that the liempo served to her was a pork chop and she didn't like it. 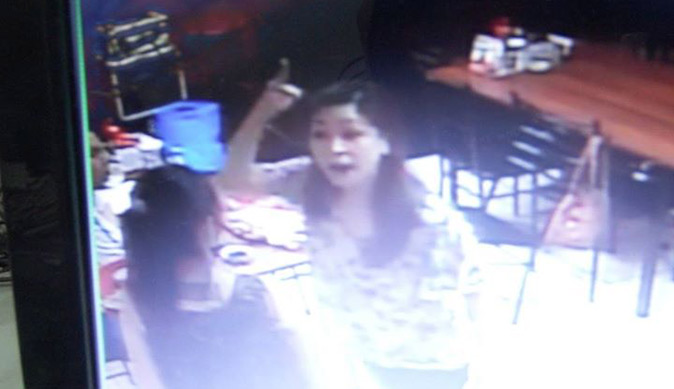 THE CUSTOMER WHO WENT HAM!

We [husband and I] have been working our ass off as service crews for our small startup restaurant for almost two months now. We're still in the process of filling the post, so we do the job for now. We're hands-on like that. For two months, we've been looked down upon, especially of customers who think that we really are "service crews." Of course, being owners of this business, it would sometimes hit our pride, but we never show it when interacting with customers. No matter how "sungit" or "angas" a customer is we see to it that we handle them professionally, because first and foremost, we would want them to come back to our restaurant (maybe not everyone, but you get the gist).

Being the owner-slash-service crew, I've heard the bests and the worsts about our food and our resto in general. The negative, I would usually just shrug off, and move on to the next customer bearing the same friendly attitude.

There are people who are still living with the "CUSTOMERS ARE ALWAYS RIGHT" principle. Unfortunately, that doesn't apply here. Customers have limitations, even though you PAY for the food and service, and you fuel our business, you don't have all the "RIGHTS" in the world.

And so, that's what a WOMAN realized earlier this evening.

This woman walked into our resto with a man. The man ordered our bestseller, Pares, and the woman ordered Liemposilog, which is actually a bestseller too. When I placed their orders on the table, the woman immediately said, "Ay, akala ko liempo, bakit porkchop yan?"

Then when I reached the cashier's area, she asked me for a knife, and sarcastically said, "Pahiram ng knife para dito sa PORKCHOP."

Then she began talking about different things how "hard" the liempo is. That she wouldn't be able to eat it. If you've heard what she's saying by the time she saw the samples, you would know that she's trying to save her humiliated ass by pointing out other 'negative things.'

Now, if she just talked relentlessly, I probably wouldn't waste

a few minutes of my life with her. However, something UNEXPECTED HAPPENED while she was saying those things. She took her FORK and began poking it at me. AN INCH AWAY FROM MY EYES. Then, she took her plate, and almost shoved it to my face. [See frames with red marks.]

That's when I decided that I cannot, for the life of this resto, have this woman in front of me a little longer. I told her, "Hindi mo pwedeng gawin sa akin yan. Ako ang may-ari nito. Kung ayaw mo ng pagkain, lumabas ka na lang." [See row 2, 2nd photo from left]

THEN, she went double HAM, and began shouting. Stood up, kicked her chair backwards, then pointed her finger at me. Telling me that she's my customer, that I'm rude, that she knows porkchop and liempo, that she didn't like what she ate.

I told her that she didn't have to use her fork and almost hit my eye just to get her point across. Then she shouted some more, poked me with her finger a few more times. Told me that She's a nurse, and that she knows what salmonella is. That her patients would poke at her too. I then told her, "So dahil ginagawa sa'yo ng ibang tao, gagawin mo rin sa akin. Hindi naman ata tama yun. Una sa lahat pinakita ko ung samples sa inyo dahil pinagpipilitan nyong porkchop yan pero hindi naman. Ikaw ang bastos hindi ako."

Then she shouted some more, even talked to my face, about the same shit. She kept on attacking. I told them both "maayos akong nakikipagusap sa inyo tapos duduruin nyo ako ng tinidor."

She continued arguing that she couldn't consume what she ordered. Told me, "Sige kainin mo 'to. Ikaw ba makakain mo 'to."

Which is true, we eat our lunch and dinner in the resto EVERY.SINGLE.DAY.

By this time, I'm calm AF and just wanted this ordeal to be done with. I even excused myself (I could've just turned my back but didn't) to get their sales invoice, told the guy that I'll be back with their bill, and if he could talk to his companion because she just wouldn't give up shouting. She continued with her spiel about our food, called me "bastos," which is the most ironic thing. She then said that she wouldn't pay for her order. I told her, fine, just pay for the rest then leave. It took her almost a minute or two before she pulled 100 peso from her bag.

While placing the payment on the register she continued with her LINES, until she got out of the resto.

THE GUY, who probably lost his balls throughout the convo, left shortly after the woman was out. He didn't apologize whatsoever, but he looked VERY EMBARRASSED about how that woman acted.

So yea, posting this kasi pasikat tong babaeng 'to eh. No seriously, I just want to let this out.

YOU REALLY CANNOT BUY CLASS. UNFORTUNATELY SOME PEOPLE GROW OLD, but DON'T GROW UP. I DON'T CARE IF YOU'RE A NURSE OR THE PRESIDENT OF THE UNIVERSE, YOU SHOULD RESPECT OTHERS. Kasi you'll never know eh, maybe she assumed that I was just a "service crew." Little did she know that I am the owner. Excuse me, nagtapos din ako ng kolehiyo at umangat sa corporate ladder. Your being a nurse doesn't intimidate me. But regardless if the one you're talking to is the owner or the janitor, you should respect him / her.

Just want to add this, having experienced being a service crew for almost two months, we learned how to appreciate people who have this kind of job. Mahirap. Masakit sa likod, sa legs, sa buong katawan. Unfortunately, there are people like this nurse who would belittle them for what they do. And it happened to me first-hand. I'll charge this horrible night to experience.

Lastly, the moral lesson: If you don't know the difference between a liempo and a porkchop, mag-Pares ka nalang, P85 lang. #segue

Aside from getting viral, her article also sparked a debate among netizens whose exchange of views centered on the motto "The customer is always right."