Personal remittances from land-based workers with work contracts of one year or more grew by 4.6 percent during the eight–month period while those from sea-based and land-based workers with work contracts of less than one year rose by 2.4 percent. The US$2.3 billion remittances in August 2015, however, were lower by 0.8 percent compared to the year-ago level. This was partly due to the depreciation of some currencies against the US dollar, particularly the euro, Canadian dollar, and Japanese yen, which reduced the dollar equivalent of remittances sent from host countries.

The steady deployment for OF workers continued to provide support to remittance inflows. Preliminary data from the Philippine Overseas Employment Administration (POEA) showed that for the period January–August 2015, total job orders reached 584,816, of which 41.5 percent were processed. These job orders were intended mainly for service, production, and professional, technical and related workers in Saudi Arabia, Kuwait, Qatar, Taiwan, and Hong Kong.

The BSP started to release data on personal remittances in June 2012. As defined in the Balance of Payments Manual, 6th Edition (BPM6), personal remittances represent the sum of net compensation of employees (i.e., gross earnings of overseas Filipino (OF) workers with work contracts of less than one year, including all sea-based workers, less taxes, social contributions, and transportation and travel expenditures in their host countries), personal transfers (i.e., all current transfers in cash or in kind by OF workers with work contracts of one year or more as well as other household-to-household transfers between Filipinos who have migrated abroad and their families in the Philippines), and capital transfers between households (i.e., the provision of resources for capital purposes, such as for construction of residential houses, between resident and non-resident households without anything of economic value being supplied in return).

There are some limitations on the remittance data by source. A common practice of remittance centers in various cities abroad is to course remittances through correspondent banks, most of which are located in the U.S. Also remittances coursed through money couriers cannot be disaggregated by actual country source and are lodged under the country where the main offices are located, which, in many cases, is in the U.S. Therefore, the U.S. would show as the major source of OF remittances because banks attribute the origin of funds to the most immediate source. 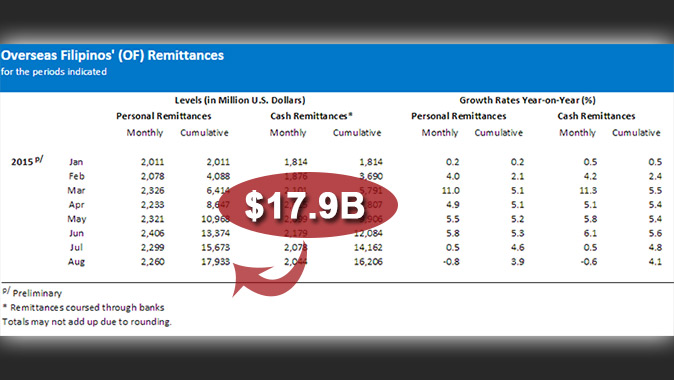