By Coolbuster
September 24, 2015newsviral story
A jeepney driver earned praises from netizens after he returned an iPhone left by a female passenger in his public utility vehicle by accident.


Rochelle Anne Obleno, who took a jeepney ride from Project 2-3 to Buendia, was on her way to a law class on Saturday when her iPhone fell from her blazer pocket. She tried to chase the jeepney driven by Eduardo "Toto" Acula, Jr. but to no avail as the latter already sped off.

In a viral Facebook post, the aspiring lawyer said she wasn't able to contact her own phone because she earlier set it to Airplane Mode. Although upset, she was optimistic and had felt that her iPhone will be returned through an act of kindness by whoever found it.

Out of despair, Obleno called up her phone during lunchbreak and was surprised to hear that that it rang. It turned out, she said, that the driver got hold of it and was kind and clever enough to insert her SIM on his own phone.

Obleno met up with Acula and his wife at a Jollibee branch in Anonas and immediately shook the hands of the couple, whom she described as simple but with big hearts and the brightest smiles, greeted them, and thanked and praised them endlessly.

The most touching part of the moment came when Alcula told her that he feels great to have returned the iPhone even though its price could have been equivalent to months of "boundary" earnings if sold. He then cited the importance of bringing food to his family's table through hardwork.

The driver said he went back to the University of Santo Tomas hoping he would find her there. He also planned to seek the help of the Tulfo brothers through their radio or television program to find the owner.

Obleno was all praises for the honest jeepney driver for choosing to live an honorable life over personal interest. 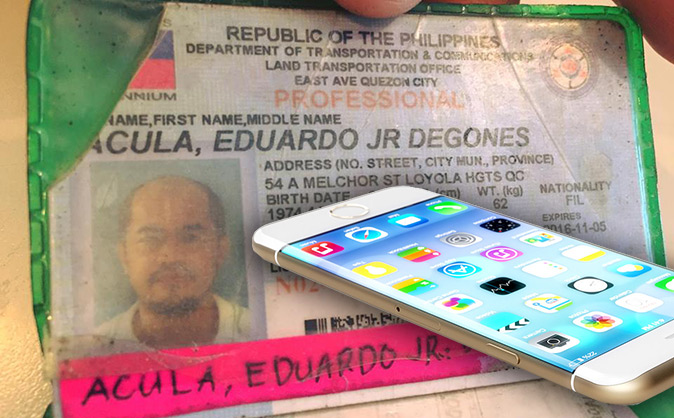