By Coolbuster
September 01, 2015Entertainmentnewsvideoviral
Filipina girl group 4th Power blew away the judges and audience of "The X Factor UK" with an electrifying performance during an audition.

Fourth Power received a standing ovation from everyone in the Wembley Stadium in London.

"It's funny, you came on, you're so demure. The music kicks in, you all turn into little bad girls up there...it blew me!" the British pop and R&B recording artist and songwriter added.

Rita Ora called them "minute monsters" for their passion, voices and attitude. Truly amazed, the singer and actress said she wanted to be their sister.

Meanwhile, television and radio presenter Nick Grimshaw said 4th Power's audition will "blow up all over the world," a forecast Simon Cowell agreed with.

Stunned, the hard to please X Factor judge said the performance was probably one of the best he's ever seen. He declared:

"Fourth Power, you have the biggest four yeses we've ever given!"

The girl group is no novice to performing before a huge audience.

In 2012, they were grand champions on ABS-CBN's noontime variety program "It's Showtime." The following year, they won 16 gold medals, 4 silver medals and 4 Overall Champion plaques during the World Championships of Performing Arts (WCOPA) competition.

Last year, the siblings competed in the South Korean talent search "Superstar K6" but failed to make it to the finals. 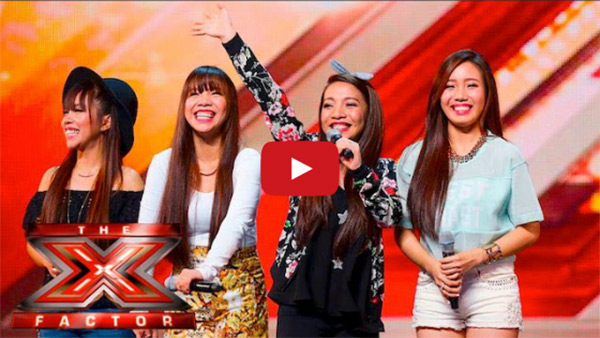