By Admin
September 30, 2015news
A female overseas Filipino worker (OFW) and her foreigner-boyfriend were arrested by cops Sunday night in Al Khobar, Kingdom of Saudi Arabia.


According to Facebook user Raisha, authorities nabbed her friend, Aisha (not her real name), in the evening of September 27.

The Filipina maid, who hails from Davao City, is apparently in a relationship with a Pakistani based on her Facebook posts. Her employer reported to police while she was seeing him outside their house. 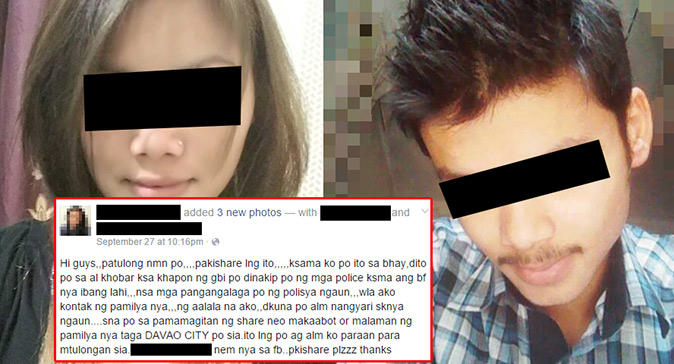 KSA, an Arab state, has strict laws against adultery. In Muslim countries, adultery and other immoral behavior and acts are not tolerated.

Pinoy-OFW.com reported that expressing love in public would lead to deportation. If caught with a boyfriend or girlfriend in public, expats are punished and might get banned, the website added.

Raisha sought help from her friends and fellow OFWs so that the information about Aisha's situation would reach Philippine authorities.