By Major Tom
July 01, 2015musicnewsvideoviral
In life, choosing to be a musician is no guarantee to becoming a rock star. Fame and fortune don’t immediately follow when one becomes really good at playing an instrument. Sometimes it takes so many years and (in this case) social media’s help to bring attention to a talent who is worthy of recognition.


Today, a selfie video of a guitarist playing lead guitar inside his humble home went viral after a Pinoy rapper shared his video, which was originally posted on September 24, 2013.

After almost two years since taking a video of himself playing “Canon Rock” by Jerry C (a classical song by Johann Pachelbel), Tem Tabuyan now finds a new generation of fans who are impressed with his guitar playing skills, this after Bassilyo, the artist behind the Tagalog hit song “Lord Patawad”, shared his video.

Dubbed as “Walang Palya si Lolo Bangis” in the shared video, some netizens requested a family member to create a Facebook page for him but he already has one. One even commented that he wants to become a student of the guitar master.

The original video only has 50 views and 5 comments whereas the video shared on Bassilyo's page has already gotten more than 275,000 views and shared more than 11,200 times in less than 24 hours since posting - a proof of how viral it has become.

Tabuyan, who is a resident of Taguig City in Metro Manila, is the lead guitar player of the local group “D Beats n’ Pieces Band” and has also been seen performing with guitar icon RJ Jacinto at Dusit Thani Hotel in Makati.

Hopefully, this video would give Lolo Temyong alias "Lolo Bangis" the much-needed exposure to be able to get more gigs and receive a better pay so he can live comfortably in his senior years. 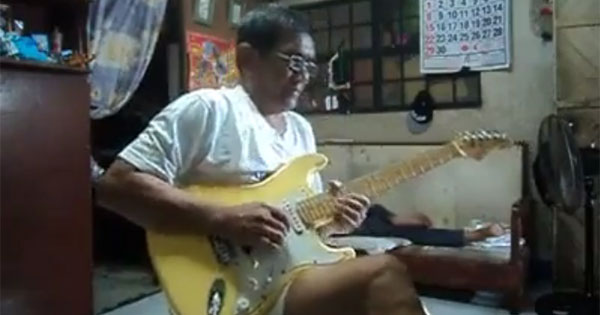