By Admin
July 08, 2015newsshowbizvideoviral
In this viral video, an apparently drunk Baron Geisler challenges bouncers to a fistfight as he creates a scene outside a Pampanga dance club.


Facebook user Mojahid Abdulmoumen, who uploaded the clip on Tuesday, July 7, said the incident took place in the vicinity of Skytrax Superclub, a popular disco bar in Angeles City. He did not say when it happened.

In the video, Baron can be seen shouting and cursing at someone. He also raised a middle finger to his enemies.

The 33-year-old actor, who is wearing a black jacket and brown pants at the time, appears to be intoxicated.


According to Mojahid, Baron got mad after the bouncers refused him entry to the party place.

Here's a video before he made a scene:


Baron is set to appear as the young Ramon Roman or Tagasundo (played by Leo Martinez) on ABS-CBN's fantasy drama television series "Nathaniel." 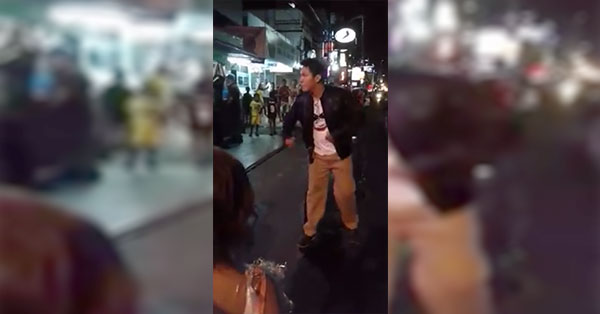