Jorge Kahwagi vs Ramon Olivas: 'Most pathetic' boxing match ever

By Admin
July 14, 2015boxingnewssportstrending topicvideo
Jorge Kahwagi defeated fellow Mexican fighter Ramon Olivas in what is said to be the "most pathetic" boxing match the world has ever seen.


The fight, which took place Saturday, July 11, in Pinoy Pride 31 "Clash of the World Champions" held at the Waterfront Hotel and Casino in Cebu City, drew laughter from the crowd.

Kahwagi, a businessman, politician and showbiz personality in Mexico, knocked Olivas out in the first round in spite of his "awkward" boxing style.

As what Boxing analyst and commentator Ronnie Nathanielsz said, he "throws punches in slow motion" possibly because he reportedly had implants in his chest, arms and shoulders. 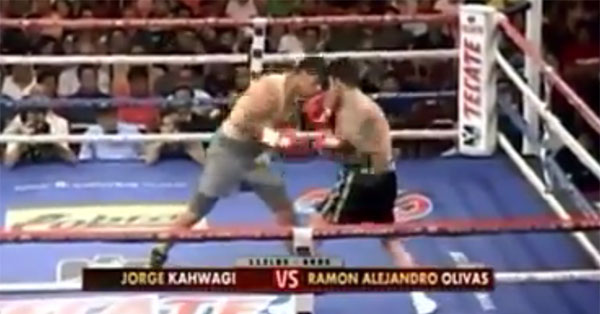 It appears that the match was staged apparently to help boost Kahwagi's political career.

After the referree stopped the fight, Nathanielsz said:

This fight was requested by Fernando Beltran of Zanfer Promotions, alright, and ALA [Boxing] just accommodated them with Zanfer.

And I think Zanfer takes care of all the expenses.

Now, this guy, Kahwagi has political ambitions so this fight, which is being beamed to Mexico, should probably, probably help him a little in his political campaign if you don't know your boxing."