By Major Tom
July 02, 2015news
As Tropical Depression “Egay” crosses the country, it has now taken some lives. At least 36 people have been confirmed dead as a passenger ferry capsized in turbulent waters near Ormoc City in Leyte. The tragedy happened just a few minutes past noon Thursday, July 2. 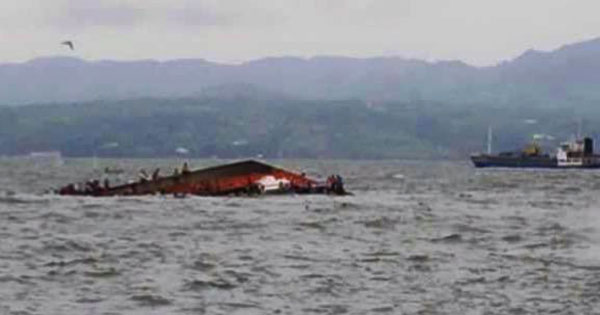 The pump boat M/V Nirvana was on its way to the town of Pilar in Cebu and was just 100 meters away from the port of Ormoc City when it keeled over and capsized, according to a report from Rappler.

On its Twiier account, the Philippine Red Cross confirmed the number of deaths to be 36, which are in 4 different hospitals.

Also in the same tweet, there were 174 passengers in the ferry based on the manifesto. 118 persons have escaped with their lives and 20 are still missing.

Meanwhile, the National Mapping and Resources Information Authority (NAMRIA) advised all vessels within the vicinity to be on the lookout for survivors of the tragedy.

NAVIGATIONAL WARNING: Passenger boat sank in vicinity of Ormoc, Leyte. Vessels in the area are requested to be on the look out for survivors
— NAMRIA Maritime (@NAMRIA_Maritime) July 2, 2015

Rescue operations are still underway as reported by ABS-CBN via their Youtube channel.


The ill-fated passenger ferry may have been overloaded beyond its capacity. A netizen observed that this happened only a few days after Ormoc's fiesta.

We pray for the safety and eventual rescue of the remaining 20 missing persons of this maritime tragedy.