By Admin
July 25, 2015newsphototrending topicviral
Adrian Van Oyen, an Australian candid camera and prank comedian, is in hot water over what netizens describe as an offensive Facebook post.


On Friday, July 24, the 21-year-old YouTube sensation posted a snapshot of what appears to be a Vietnamese newspaper advertisement which offers to those who are looking for a wife virgin women for sale at $6,000 each.

In his caption, Van Oyen says "Sounds like a pretty good deal." 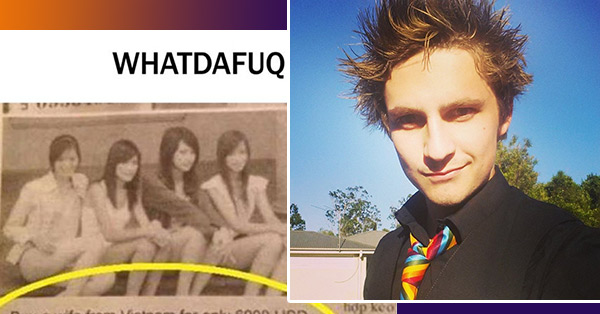 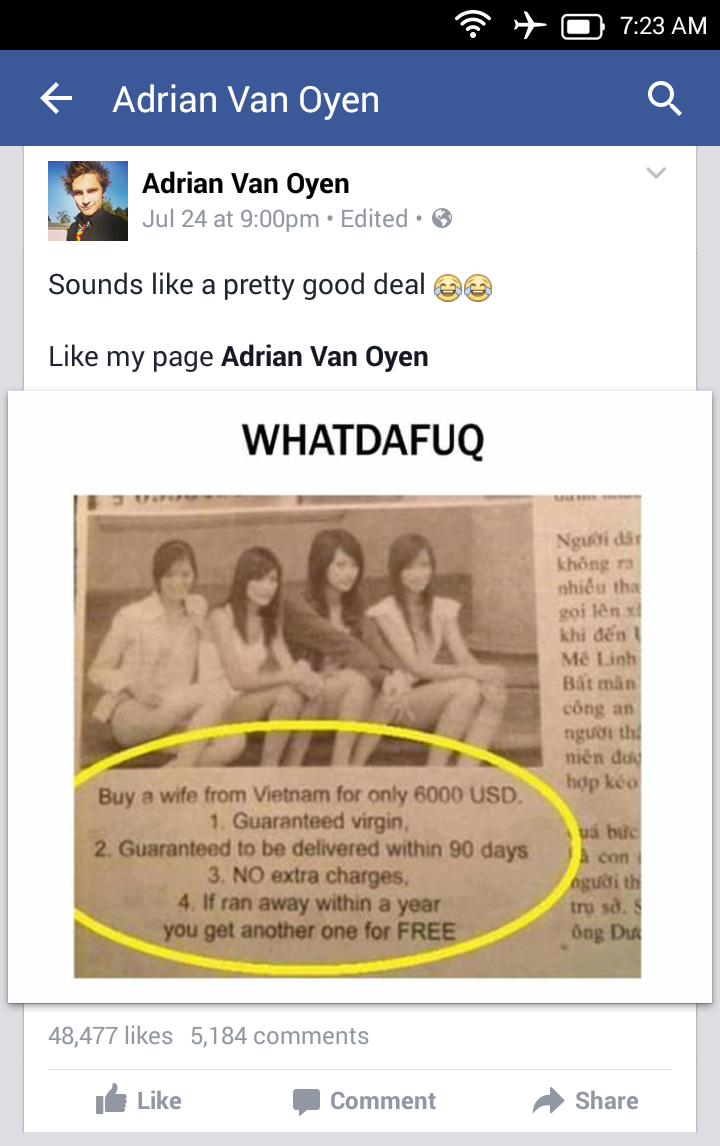 It turned out that the ad is a revised version of the Chinese banner that became controversial in 2012.

Van Oyen's post, however, was immediately flooded with comments mostly coming from disgusted Vietnamese netizens, some of whom called it "racist".

Chi Võ posted: "I know you're trying to have some fun but this can be considered as very offensive. In my country (Vietnam), there are many reports about missing girls who are really poor and few are found sold in another country. Please don't use this as a joke ever again."

Skyler Greyson: "Human trafficking isn't a joke. You think young girls being kidnapped and sold is funny? What the hell is wrong with you? It's a human life, not a god damn bargain."

Heo Niềng Răng said "damn, it is not funny at all using Vietnamese women as jokes...Which century are you in now dude?! There is no such things as buy & sale women, with that kind of attitude... Speccially vietnamese!! you think we are fools, easily bought by you and then do what ever you want to as slaves?!???? I am a Vietnamese girl so PISSED OFF!??!!!"

Renee Piper: "Adrian Van Oyen appealing to all the rapists in the world to get likes are you? This is beyond disgusting. Human trafficking is no joke. The fact that you think this is funny and your statement "sounds like a pretty good deal" shows your own rapey attitudes."

Richie Lim: "Doesn't matter where the girls are from . nobody deserves to be bought / sold like that. human lives aren't an object to be bought and sold. God created us to be priceless, not 6000 USD. And we're definitely worth more than "lose one , get one for free". How would you like if I sold your son/daughter for 6000 USD then tell u "nvm. Make a new one for free right?"

Vivian Tan: "This is human trafficking. How can anyone think it's okay to make fun of it?"

Adrian James Holt in real life, the Aussie prankster in the hot seat has been involved in controversies in the past few years.

According to a Wikipedia entry about him, Van Oyen in 2012 pleaded guilty in the Brisbane Magistrates Court to impersonating a Queensland Rail ticket officer and to being a nuisance on public transport over his "Awkward Train Situations" video.

The Magistrate reportedly released him on a six-month good behaviour bond and ordered he pay $60 to clean the train although a conviction was not recorded.

In October 2013, he reported on Twitter he was going to court again for "Awkward Train Situations 2" and he was listed as appearing in the Brisbane Arrest Court.