By Coolbuster
June 01, 2015newstrending topicviral story
The viral story about an old woman who was allegedly kicked out of KFC for breastfeeding her 42-year-old son is fake. We will tell you why.

Mississippi – A 76-year-old woman has created controversy yesterday, by breastfeeding her 42-year-old son in the middle of a KFC restaurant. Many customers of the fast food joint would of complained about the incident and prompted Linda Berrety and her son, Michael, to leave the establishment. Both finally got expelled.

This unusual episode has sparked strong reactions on social medias and provoked a huge debate on the limits of breastfeeding in public places, while many customers present at the time of the event seem to have seen a gesture of sexual nature and incest, rather than a gesture of maternal concern.

“It’s my right as a mother to breastfeed my child,” says Mrs. Berrety. “If people don’t agree with the way I raise my son, that’s their problem. I have raised a great man, beautiful, tall, who still lives and stays with me. I think I’ve done a great job as a mother and don’t appreciate getting insulted and expelled just because I decided to breastfeed my child a little longer than other mothers.”

So what makes it a hoax?

First, except for the single mention of Mississippi, no specific information as to which KFC branch the incident really took place.

Second, the woman described in the article as "KFC spokesperson Jocelyn Binoy" is actually Juliet Bynoe-Sutherland, director of Pan Caribbean Partnership against HIV and AIDS (PANCAP).

Third, the photo of the supposed mother and son was taken from a news story regarding British "age gap" couples, a video of which is embedded here. 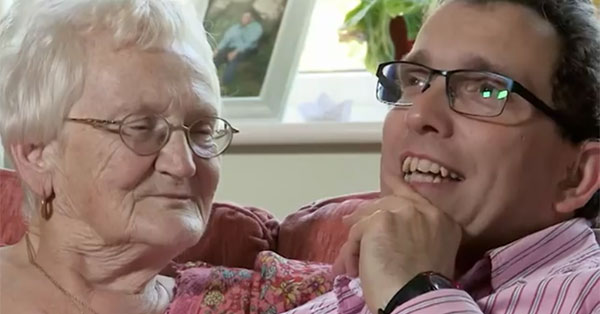 So why do some websites publish fake stories? The answer is simple: to gain attention and receive more traffic for higher earnings, even if they would lose credibility at the same time.