What happens to your pet dog when you're not around?

By Admin
June 25, 2015animal welfarenewsviral story
Do you know what happens to your pet dog when you're not around? This has not been figured out by a responsible dog owner... until yesterday.


Twinkle (not her real name), a certified dog lover residing in a town in Mindanao, owns four dogs. She loves her pets so much that she provides the animals with everything they need including sufficient healthy food and a clean, spacious area to sleep. In other words, she gave them a home. 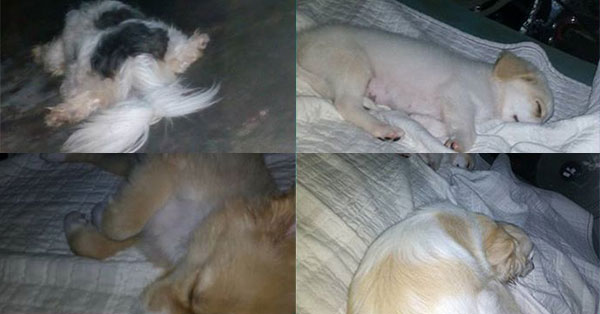 Several days ago, Twinkle noticed that her dogs were staying very close to her when she's at home. Her pets didn't want to leave her side as if they were like helpless kids who were asking for emotional support and protection from harm.

She was wondering for days until she arrived home from a Cebu trip over the weekend.

Twinkle found out that her two housekeepers left her house unlocked and her dogs unattended and unfed for two days because they also went on a vacation while she's away. They came back by Monday evening.

In an interview with Coolbuster.net, Twinkle revealed that she confronted the two housekeepers and even checked their things when her instinct told her to do so. She was very surprised to discover that some of her and her partner's belongings including clothes and underwears were in their possession.

They stole things from her and she was hurt. Twinkle treated them like family—in fact, she has wonderful plans for them—yet they had the guts to betray her trust.

To cut the story short, Twinkle decided to let the housekeepers go. They left Tuesday morning. The following day, she received a shocking news from her mother.

A cousin of the housekeepers, who is a working student for Twinkle's sister, admitted on Wednesday that the two had been hitting her dogs and bathing them in a washing machine.