By Coolbuster
June 29, 2015newstrending topicvideo
A family sought help from a TV station after finding out that the rice they bought was fake as its grains turn into styropor once cooked.


In an exclusive report from GMA News Davao, the businesswoman and her kin complained about the quality of rice they purchased from a local store.

At first glance, the fake rice looks appetizing because the grains are very white. However, it would feel like foam when firmly pressed, the report said.

Carmencita Griño said the handful of rice she was holding felt like styropor so she decided not to serve it for meal as it could harm family members.

Ma. Elaine Respicia, assistant manager of the National Food Authority (NFA) in Region 11, said they will ask for a raw sample of the rice for laboratory analysis, which will take more or less 3 days, to determine whether or not the rice grains are synthetic.

She said synthetic rice is not suitable for human consumption.

According to the Department of Health (DOH) and the Food and Drugs Administration (FDA), a sample of the fake rice should be submitted first and the complainant needs to go to their office to file a legal complaint and make an affidavit so that the sample will be tested. 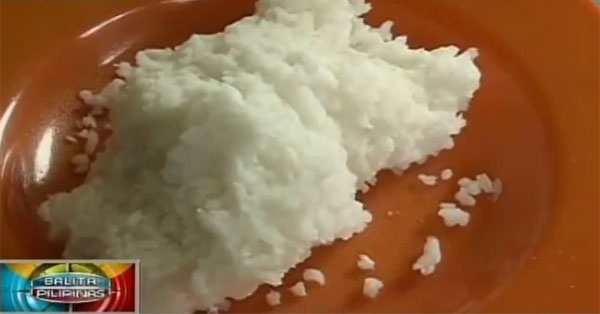 Netizens on social media believe that the fake rice is made in China.

Since 2011, there have been numerous reports that China, known for making fake food items, makes fake rice from plastic. The fake rice is reportedly a mixture of potatoes, sweet potatoes, with synthetic resin moulded into the shape of real rice.

In May this year, it was reported to have reached Asian countries such as India, Indonesia, Vietnam, Singapore, and the Philippines.