By Major Tom
June 12, 2015basketballnewssports
A little tweak in the starting line-up by Steve Kerr and his coaching staff putting in Andre Igoudala in Game Four gave the Golden State Warriors a much-needed victory, 103-82, and the 2015 NBA Finals is now tied at 2-2.


Kerr elected to go with a smaller starting five by sitting Andrew Bogut in the bench and the adjustment worked wonders as the team finished with a 21-point difference against the Lebron James-led Cavaliers.

The story is the first start by Andre Igoudala in the Finals, or the playoffs for that matter, and the former All-Star has exploded for his 22-point performance (tied with Stephen Curry) for the Warriors and he is showing folks how good a player he is by guarding Lebron plus scoring and shooting the ball with confidence.

Lebron James, only able to contribute 20 points for Game Four, hit his head on a camera lens (at 4:43 mark of the second quarter) after losing balance on a baseline drive against Warrior center Andrew Bogut. The cut on his head obviously bothered James as he struggled to get his points and wasn’t able to keep with his series average which was 41 points per game through three games in this year’s Finals series.

The Warriors had control of the game most of the way. They led by twelve points, 54-42 at halftime as Stephen Curry escaped Matthew Dellavedova’s defense for a scoop layup to give the Warriors the cushion. The game’s best player, Igoudala opened the second half with his second three pointer enroute to a 22-point performance.

Aiming to get a commanding 3-1 lead, the Cavaliers countered with back-to-back threes by Matthew Dellavadova to put the Cavs in the scoreboard for their first points in the third quarter. Also worth noting is the number of dives the Australian point guard as made in the series with six.

Cleveland, led in points made by Timofey Mozgov with 28, tried to make a run in the third quarter and the closest they got to is three points. The Warriors, hung on despite the barrage for a six point lead for the Warriors to close the third with a three pointer from Stephen Curry 76-70.

The Warriors go on a roll and gets a 10 point in the early going of the fourth quarter of Game Four to eventually come out on top and a drubbing of the shorthanded Cleveland team.

In the post game conference Steve Kerr apologizes to the press for “lying” and defends his decision not to expose his tactics to the other team. The adjustments he made have the series back to square one. Next game will be back in Oracle Arena in Oakland for the resumption of the 2015 NBA Finals on Monday, 8 AM Manila time. 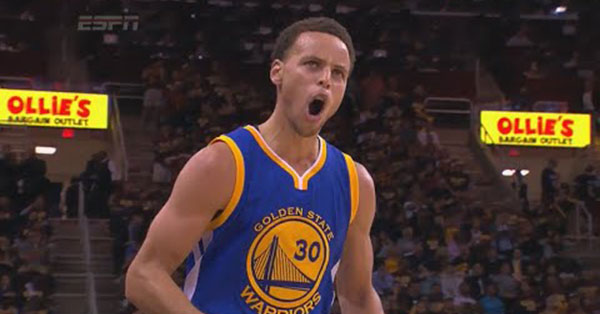