By Coolbuster
June 24, 2015newsvideo
A video of two coast guard personnel and a barangay chairman, who were reportedly kidnapped off Dapitan, seeking help, has surfaced online.


In the video, which was posted Wednesday, June 24, on Tr3nding Facebook page, three blindfolded men are shown being surrounded by their kidnappers.

The coast guard personnel identified themselves as Rod Allain Pagaling and Gringo Villaruz. The other captive said he is Rudy Buligao, chairman of Barangay Aliguay, an island village in Dapitan.

BREAKING: TATLONG KALALAKIHAN DINUKOT AT BANTANG PUPUGUTAN NG ULOBREAKING NEWS!!!This was posted 8 hrs ago! As of the time that it was posted by the main uploader! I found it on some facebook group but was erased... Buti nlng nacopy ko ang link.I am not sure if this post was real or not, But prevention is still better than cure.Sana ang post na ito ay walang katotohanan. At naway maging ligtas ang ating mga kabayan..CREDIT: Kupal lord

According to a PhilStar report, the victims identified as Seaman 2nd Class (SN2) Gringo Villaruz, SN Rod Pagaling and Barangay Captain Roberto Bulagao were seized on an island resort off Dapitan City in Zamboanga del Norte before dawn on May 4, 2015.

Philippine Coast Guard commandant Adm. Rodolfo Isorena reportedly said they are conducting an investigation to determine the motive and the group behind the kidnapping.

He said the two PCG men may have been kidnapped accidentally as they were in the area when the kidnappers seized Buligao, who sought help from Villaruz and Pagaling to check if the boats carrying tourists to the island were not overloaded.

Meanwhile, sources from the Dapitan City Police reportedly said they believe the target of kidnappers was rich Chinese businessmen in nearby Dipolog City, but the group was intercepted by the Special Forces of the Army's 101 Brigade, according to a report on Rappler.

Sanita Buligao, wife of the kidnapped barangay chairman, told the news team that the armed men were wearing military uniforms and were asking for foreign tourists. Having found none, they ordered a resident to take them to the house of the kidnapped local official.

"They identified themselves as policemen and were looking for shabu," she said in a phone interview. "They were speaking in Tagalog, but when they went back to their pumpboats, they were speaking some other dialect."

In the video uploaded today on Facebook, the kidnappers threatened to behead one or all of the victims if their demands are not met. 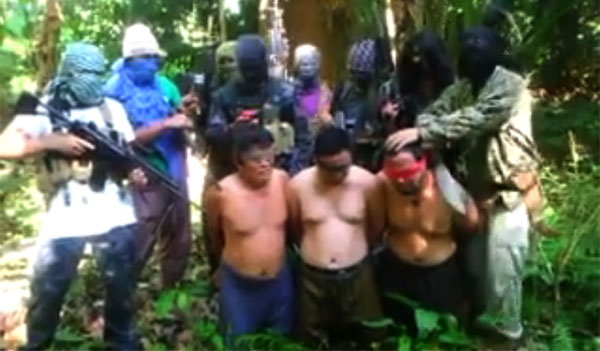