By Admin
June 08, 2015newsvideoviral
That strange trumpet sound heard in Lobo, Batangas is fake. There are evidence that can debunk the claim and prove that it's just a hoax.


Vincent Andy Magnaye, who uploaded the video on Facebook, said he heard the strange sound around 3 p.m. last Thursday, June 4. 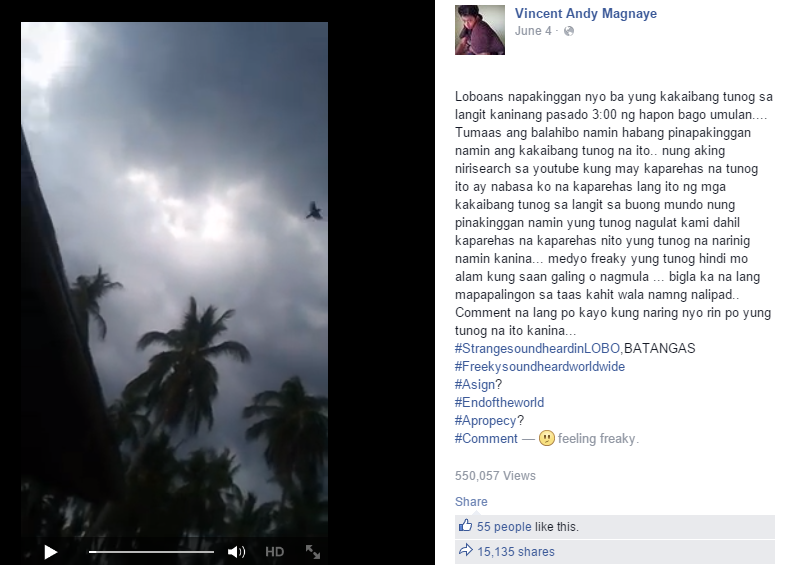 We have noticed in the comments section of Magnaye's Facebook post that no one corroborated or gave support to his claim. Nobody said they also heard the strange sound in their town or barangay.

Netizen Robert Romero Villar in his comment on Trending News Portal said Magnaye's video is "just like the other fakes who took parts of the original audio from: https://www.youtube.com/watch?v=vcUDYBIrWio - released from August 2011," referring to the following video taken in the capital Ukranian city of Kiev almost four years ago.


Villar noticed the "same bird chirping pattern, same bird call, same horns, [although at a] different volume [level]." He also noted that "a button was pressed" at around the 47th second of the video.

In an interview with ABS-CBN News, the 17-year-old uploader said he heard the eerie trumpet-like noise while browsing the internet at the terrace of their house in Barangay Masagitsit, municipality of Lobo.

Magnaye said he felt goosebumps and didn't know where the sound came from.

He said the animals in their surroundings were acting strangely as the weird sound went on for about 7 to 10 minutes, adding that birds were flying without clear direction and their dog looked like it was afraid of something.


Did he lie to get media attention? Maybe, but why?

This hoax might be blog revenue-related. The uploader could be related to Von Jovi Magnaye Sabido, owner of a blog called The Pinoy Scoop, who is notorious in the bloggerverse for his alleged content copy-pasting.

But it's really up to people to decide on who and what to believe.

Anyway, watch this video from filmmaker and online radio host Chris White for a detailed explanation about the possible source of the strange trumpet sound.