According to unverified sources, the couple used to be typical clanmates who share game strategies, tips and tricks to beat their enemies. Months have passed before they realized that they were already falling for one another. 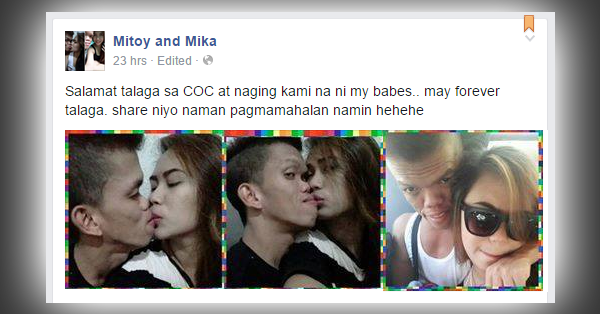 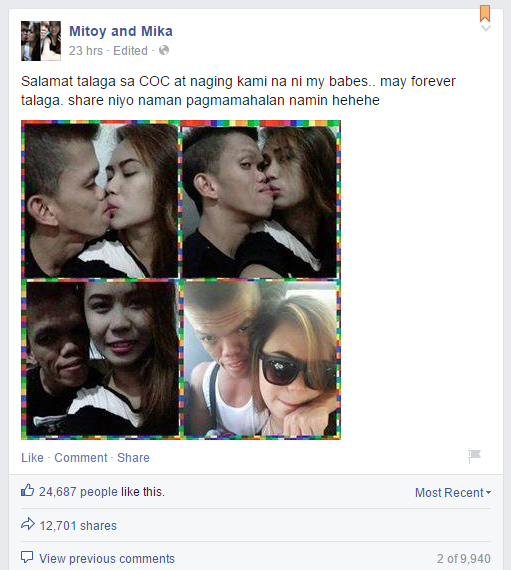 Two years later, Mitoy and Mika fell in love and decided to enter into a relationship, which is currently facing challenges considering that the guy is not good-looking.

Mitoy reportedly said he doesn't care what judgmental people say. What's important is that they love and care for each other.

For her part, Mika reportedly said she looks beyond her boyfriend's appearance. She described him as "kind-hearted" and "faithful," two of the good qualities she said a guy must possess.

In his Facebook posts, Mitoy expressed gratitude to God for giving him a pretty "babes." However, most of his status messages were met with criticisms.

While some netizens told the couple to just ignore the bashers, others said they couldn't believe that the relationship really exists.

The story turned out to be fake and only made up by a satirical blog.

According to Social Trends PH, the girl in the photo is Althea Beruya Ronquillo while her boyfriend is Pat Esconde Patricio.

The couple, who used to be workmates in Makati, never played Clash of Clans.