By Major Tom
June 05, 2015basketballsports
At the resumption of the NBA 2015 season, the Golden State Warriors play host to the Cleveland Cavaliers at the Oracle Arena in Oakland, California and the 2015 MVP led Warriors prevails 108-100 over the team that has the best basketball player of this generation.


With a star-studded crowd in attendance which included the likes of superstars former NBA champion Magic Johnson, singer Rihanna and undefeated American boxing champion Floyd Mayweather, Stephen Curry and the rest of the Warriors capitalized on their home-court advantage by grabbing the 1-0 lead in the best of seven 2015 NBA Finals over Lebron James and the rest of the Cavaliers team.

Lebron James scores 44 points but is not enough as the Golden State Warriors win Game 1. The victory didn’t come easy for the number one seed of the regular season as it took another five minutes in overtime to win after ending regulation tied at 98 apiece.

Two doubtful starters for both teams, Klay Thompson for the Warriors and Kyrie Irving for the Cavaliers, began the series by playing the first game for their respective teams. Thompson, diagnosed with a head concussion suffered in the previous round against the Houston Rockets, played his usual self in his first appearance in the NBA Finals contributing to the win. Kyrie Irving, who was used sparingly in the previous round due to knee problems, made an impact by scoring 23 points and defended well including a block on a layup by Stephen Curry in the dying seconds of the fourth quarter.

The Cavaliers took the first points of the game after the tip on a field goal by Tristan Thompson and the Cavaliers came out strong to take a 10 point lead to end the first quarter of play. Lebron James, who is now on his fifth consecutive NBA Finals appearance, tried to carry his team on his shoulders by scoring 44 points, but the overall team effort by the Warriors spoiled his attempt at giving the Cavs the first game win.

The Cavaliers went almost scoreless in the extra period as the Golden State Warriors, helped by the roaring crowd, were outclassed by the Warriors where rookie coach Steve Kerr decided to go for a smaller lineup. In overtime, Kyrie Irving limped off the court after hurting his knees on a drive trying to shake off his defender in Klay Thompson. 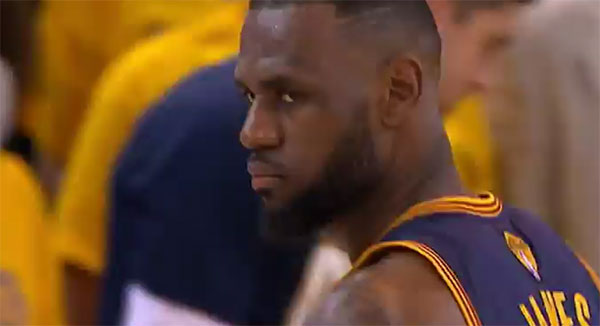