By Major Tom
June 10, 2015basketballsports
Lebron James and the Cleveland Cavaliers escaped a very determined Warriors squad and took the 2-1 lead in the 2015 NBA Finals. The game almost went to another overtime, but the Cavs hold off a furious last-second rally by Golden State Warriors squad and eke out a 96-91 victory.


Same teams battling it out after two games, but this time it is with a different sixth man. The fans in Cleveland, Ohio have come out in full support for their home team, the Cleveland Cavaliers, as the 2015 NBA Finals returned to Quicken Loans Arena after eight years.

Game Three began with James making the first basket and the MVP for this year, Stephen Curry makes the first two points for the Cleveland Cavaliers to start the game. That was Curry’s only field goal until breaking out of the slump in 6:22 of the third quarter eventually getting the groove back to lead all Warriors and finish the game with 27 points.

Iman Shumpert got hurt in the first quarter on a screen by Draymund Green, but returned to the hardcourt to help his team to a very important win in the best-of-seven series. The host team, Cleveland Cavaliers, led both quarters in the first half and came out on top 44-37 by halftime.

The swarming defensive play of the Cavaliers have forced the Warriors out of their offensive rhythm for a 13 point lead in the third quarter of play. It has made the Warriors, the regular season’s highest scoring team, work really hard for their points. The Splash Brothers, Stephen Curry and Klay Thompson,were not their usual high scoring selves in the first half as the Warriors were led in scoring by the former All-Star Andre Igoudala with 10 points until Curry exploded with his points. Not a surprise on the Cavalier’s side as Lebron James led with 13 points on his way to a total of 40 in the game. Lebron James now owns the most total number of points scored in the first three games of any NBA Finals.

Dellavadova has so far been effective in hounding the 2015 MVP no end and denying him open shots and always keeping him in check, making the Warriors leader miss shots he normally makes especially beyond the three-point arc. David Blatt sat him down in the second half for cross matches which allowed Stephen Curry to break free and gain more points than in the previous half.

The first double-digit lead of the game came in the 10:00 mark of the third quarter as Matthew Dellavedova has now outscored Curry in the battle of the point guards. The crowd in and outside of the Quicken Loans Arena went wild at 3:50 mark as the Cavs went on a 10-0 run to take a 20 point lead in the third quarter. David Blatt says, “There’s no place like home” after the run, clearly very grateful for the support the fans have given the team.

Trying to avert a loss, the Warriors went on a rally and brought it close to 1 point game in 2:37 left, but the gritty performance by Dellavadova continued with a three-point play after that plus another three-pointer by Lebron James and just like that the Cavs got it back to a seven-point lead.

With injuries to key players Kevin Love and Kyrie Irving, the Cavs got an incredible performance from Dellavedova by harassing the MVP and helping in the scoring department for the Cavaliers with his 20 point contribution, a career high for the reserve point guard from Australia.

Can the Golden State Warriors bounce back and even the series at two games apiece? Can the Cleveland Cavaliers keep the home court advantage and continue to win another one? Watch out for the 2015 NBA Finals Game Four which is scheduled to be played on June 12, Friday at 9 AM (Manila Time). 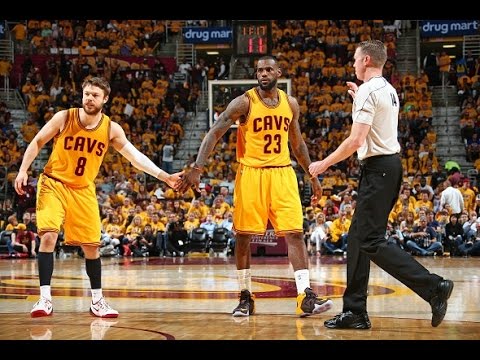