The 67-win regular season top seeded team hoists its first championship for the franchise since 1975 by outlasting a shorthanded Cleveland Cavaliers team in Game Six 107-95.


Andre Igoudala was named Finals Most Valuable Player (MVP) in a season where he only got his first start in Game Four of the NBA Finals contributing big time to contain the best player in Lebron James and score at the same time.

The Cleveland Cavaliers, with the crowd behind them playing in their home court (Quicken Loans Arena), started strong, scoring the first basket of Game 6. They defended well and led early in the first quarter. The Golden State Warriors finally got their groove and tied the game at 8 points.

Andre Igoudala, who missed his first few attempts at the three point area and at one point lost confidence in his shooting by giving up the ball to his teammates despite being left open by the Cavs, never gave up en route to scoring 25 points (the same points scored by Stephen Curry). Initially giving up his starting position on the team when new head coach Steve Kerr arrived at the beginning of the season, Igoudala reaped the reward of his sacrifice by earning NBA Finals MVP honors.

Defense has been the key for the Warriors early on in the first quarter by forcing the Cavs into 24 second violations a number of times. They have also forced the Cavs into several turnovers and some few steals by Curry.

The Cavs, playing big, utilized the height advantage and scores almost all points from inside the paint. Lebron James told his team to not worry and think about the next game, but to focus and play where they are facing elimination before the start of Game 6. Warriors led 28-15 to end the first quarter.

The Cavaliers played their hearts out including a monster block by Mozgov on Andre Igoudala after the jump ball where Shumpert and Green were tied up at approaching 8:00 mark in the 2nd Quarter and getting onother block on Harrison Barnes later. A third rejection of the period for Mozgov came later against a Stephen Curry shot as the physicality continued. Defense has been amazing by the Cavs in the second quarter. Barnes ended the drought for the Warriors by scoring a three. Cavs went for a run cut the 13-point lead of the Warriors to two and first half ended with the score 45-43.

Mozgov tied the game at 45 to open the third quarter scoring and the Cavs were able to retake the lead with a Tristan Thompson bucket 47-45. Warriors finally scored with a three pointer from Barnes to retake the lead 48-47. Another 3-pointer from Draymund Green gave the Warriors the lead on a 7-0 run. Festus Ezeli joined the scoring frenzy with two dunks in the third quarter. 73-58 was the largest lead of the game, thus far.

Golden State Warriors fans back in Oakland came in and a full house “Watch Party” were in attendance at the Oracle Arena as they got ready to celebrate if ever their team would win the championship. They are now getting ready for the arrival of their team and for a championship parade.

The coveted ring for Lebron James and the Cleveland Cavaliers started to slip away in the third quarter when the Cavs couldn’t find an answer to combat the inspired play by the Golden State Warriors. Lebron James had a renewed burst of energy in the last ten minutes of play trying to will his team to a win to extend the series to a final deciding Game 7 by getting aggressive with steals and dunks, but came out short.

JR Smith's first three-pointer of the game was in the fourth but Igoudala answered back with a three of his own to keep the lead at ten, 83-73. Klay Thompson, one-half of the Splash Brothers, only scored 5 points before fouling out of the game, but his team was ahead. Cleveland did not give up and, in the waning seconds of the game, fought to the bitter end cut the lead to four. Curry gave his team the buffer by sinking two at the charity stripe for the 6-point lead with 29.7 seconds and hanging on for the 107-95 win eventually winning the 2015 NBA championship title.

Other game highlights include a triple-double for Draymund Green, the first-ever second-round drafted player to earn such honors. 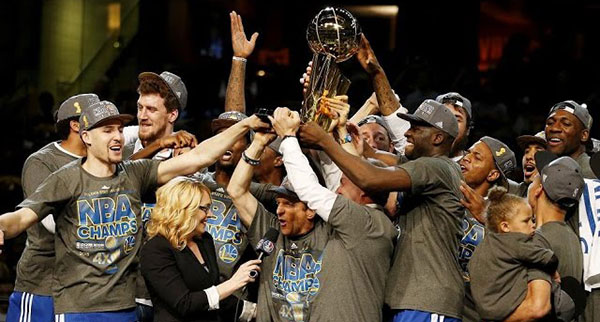