Why the people want Duterte to become President

By Admin
May 29, 2015newspolitics
We took the liberty of reposting a lengthy Facebook comment which explains why the people want Davao City mayor Rody Duterte to become the next President of the Philippines.


Netizen Jun Lue, in what seems to be the best testimonial ever made so far online about the future Commander-In-Chief, says: 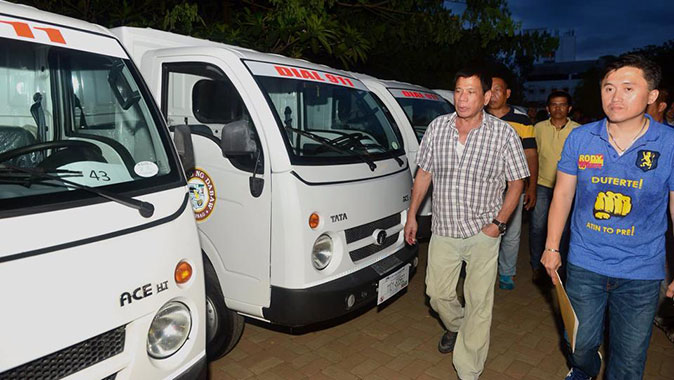 Let's put aside the killings. What are the platforms of other candidates? I heard their platforms all the time and failed all the time. Mga 'trapo' ang politicians niyo sa Manila and even you would agree. You might say Poe is good, probably but a novice.

Let's talk about Duterte. He's been going around to encourage Federalism which will solve the war in Mindanao. He also has a great understanding and concern for the agriculture. In case you don't know, Davao is one of the sources of agriculture in the Philippines. He also point out his stands on various issues like the Sabath and China and even helped on the past tragedies like the Yolanda and the Mamasapano incident. And no one can question about his stands in criminality. He chased big-time rice smuggler (Bangayan) to the Senate since he can't capture him in Davao. He also helped on getting back various individuals captured by the NPA and MILF.

The people saw Duterte during these events. He cried and laugh with them. He was the first to come in Yolanda while the rest of your officials are afraid of going to the rocky roads. He also came without any other intention but to help that his bags only states - "You are not forgotten, Davao." The people saw these things. They didn't see a fearsome dictator but a caring public servant. That is why a lot of people wants him to run even if he refuse.

Moreover, he never used our city's money for himself. He goes around with a chopper? Guess what, the owner of the chopper is Pastor Quiboloy, a friend of him. He spends our taxes for state-of-the-art equipments of 911, CCTVs, Central Anti-Disaster Unit etc. Unlike your 'trapos' there that only spends the money for 'new roads' during election.

Contrary to what all of you think in Luzon, our Mayor is a down-to-earth guy. We are not afraid of him. We respect him. He's not corrupt. He extends his office up to 3am and even brought his desk outside the city hall during brownout to help the people here. He roams around the city as a taxi driver to check how the city works at night. He gave people a ride on their way home during the heavy floods because taxis don't go to their area. Why would we fear someone like him? And why would we be afraid of his threats? We just considered them a joke because we know he only means harm to those who will harm us - the law-abiding citizens. Why would we (law-abiding citizens) be afraid of the criminals? In our city, the criminals are afraid of us.

To all of his haters including the medias, your ignorance is really annoying. You talk like you know the guy and like you know us (Davaoeños). You talk like we are deprived of our own democracy when in fact we used our democracy to choose him. Try visiting our city and see for yourselves the difference and let's see if you will still have the same thoughts after."

Disclaimer: This is NOT a paid advertisement. We did not receive even a single centavo for publishing this.