By Coolbuster
May 11, 2015newsvideoviral
A closed-circuit television (CCTV) footage that captured a group of female thieves robbing a suitcase store is making rounds on social media.


The video, which was posted less than a year ago by Ambika Pillai, a well-known hairstylist and makeup artist in India, has gone viral again after being shared on Facebook pages frequently visited by overseas Filipino workers (OFWs).

In it, four women with ages apparently ranging from 25 to 50 years old can be seen entering a retail shop selling luggages and suitcases. While the store employees were busy, one of the thieves opened the cash drawer and took the money.

Some Facebook users believe the robbery involved an "inside job." Watch the video to find out why they jumped to that conclusion. 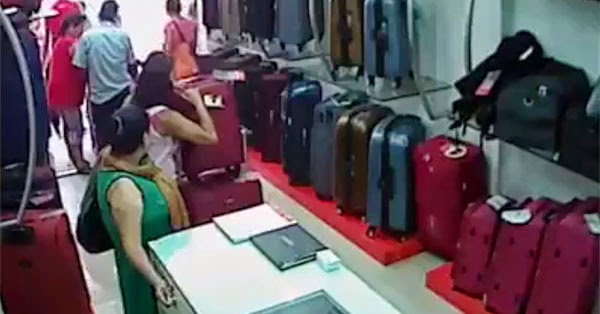 The viral video that caught how the female thieves robbed the suitcase store already got more than 42,000 likes and 316,000 shares to date.