By Coolbuster
May 11, 2015newsphotoviral
Filthy? Photos showing clothes and undergarments hung out to dry in full public view along a sidewalk in Quezon City have gone viral online.


The images, which were posted Monday on the Facebook page of motoring magazine Top Gear Philippines, got more than 5,200 likes and 477 shares as of 7:55 p.m. today.

Why are the authorities allowing this? From Richard Ong: "Hello, TGP! Captured this along Aurora Boulevard, going toward EDSA. I can't think of the right words to describe this. Just filthy." 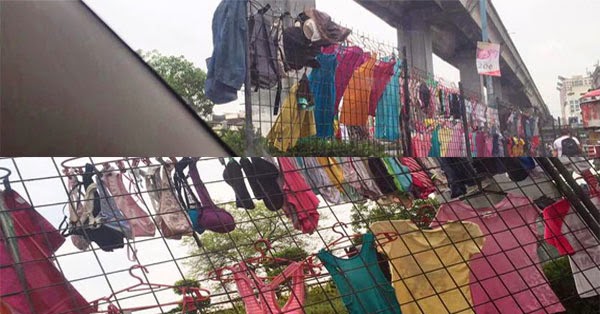 Why are the authorities allowing this? From Richard Ong: "Hello, TGP! Captured this along Aurora Boulevard, going toward EDSA. I can't think of the right words to describe this. Just filthy."

The photos also sparked an online debate. Netizens argue as to whether or not it is proper to hang clothes and undies in public places.

Khun Sjerie Crosby said: "Let us not give reason to Foreigners to say hurtful description of our country, hope the authorities can do something and yes this is not an appropriate place as well to parade them."

Joseph K. O. Paclibar posted: "And yet we get offended when foreigners say that the Philippines is a filthy country.. We ourselves don't have self descipline!!"

According to Anton Lim Saldua, "The proper authorities should probably re-read their rule book, so they can actually implement them. So that they actually know what isn't right on the public."

Erich Mercado pointed out: "It does give us an impression that we are undisciplined on a lot of things. It's really sad that we see this each and every day and we are not doing anything about it. How about reporting this to MMDA since it's their facility that are emphasised?"

Katherine Smith also added to the discussion, saying: "If you are poor that does not give you the right our street our sampayan. We must be responsible enough to clear them of unnecessary things that will make our country looks like ukayukay store. Mahalin natin ang ating bayan. The govt. cannot do all this things for us. Let us unite and help in anyway we can please."

What's your take on this?