By Admin
May 01, 2015newsphotoviral
Animals lovers are demanding justice for the death of a cat that was well-loved by an entire neighborhood as photos of the dead feline go viral.


The Philippine Animal Lovers Society or PALS, a non-profit organization that promotes knowledge in animal health, behaviour, training, dog psychology, exchanging knowledge and point of views, shared on its Facebook page pictures posted by a netizen who uses the handle Jeng Jeng Jeng.

In the caption, Jeng described the cat as "another victim of animal cruelty" and alleged that a certain Robert Roy Alvarez killed it for entering the gate of his girlfriend's house.

The uploader said most of her neighbors took care of "Puti," which grew up a well-loved cat. In spite of having no knowledge of what caused its "sudden death," she said the dead cat was kicked out of the gate as evidenced by the blood on the pavement. 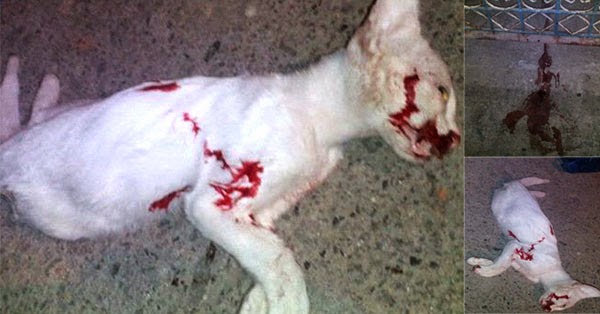 PALS' followers condemned the killing and urged the group to file a case against the suspect.

Republic Act 8485, also known as the "Animal Welfare Act of 1998," states that it is unlawful to kill "any animal other than cattle, pigs, goats, sheep, poultry, rabbits, carabao, horse, deer and crocodiles," except in special circumstances like if the killing is being done for a scientific experiment.

The penalty for violators include "imprisonment of one (1) year and six (6) months and one (1) day to two (2) years and/or a fine not exceeding One hundred thousand pesos (P100,000.00) if the animal subjected to cruelty, maltreatment or neglect dies."