By Coolbuster
May 07, 2015newsphototrending topicviral
The sea turtle which was tied up for picture taking purposes in a beach resort in Guimaras already "broke free" following an online backlash.


The exposé was made by a certain Donna Belle Islao, who posted on Facebook underwater photos of the pawikan, the shell of which, she said, has a hole and a long rope was attached to it.

In her FB post dated May 4, the whistleblower said she thinks that the turtle's legs were tied together so it can't swim away. 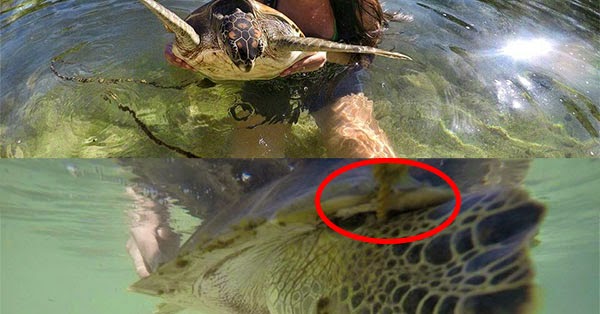 The following is her narrative of the incident:

Me and my friends went to Guimaras Island for some island hopping near Alubihod Beach. No doubt Guimaras is one of the beach destinations in Visayas they offer not just the sweetest mango on Earth but also virgin white beaches.

Our last island was the "Natago Beach" which our boatman says we could take pictures with the turtles and we were excited to reach that island we even asked our boatman if there's an entrance fee he didnt answer us. Upon approaching the island we saw some teenagers already having pictures with the turle. We waited for our turn we were excited to see the turtle.

And then I saw this long rope floating just after the turtle and I thought it was just nothing as I come closer to the turtle I was surprised that its shell has a hole and that the long rope was attached to it. I pity the turtke and decided to take a picture underwater using my gopro and as I review the pictures I wa shocked to see this. I think its the turtle's legs tied together so it cant swim away.

I am posting this picture so the turtle wont be a prisoner in that island the caretaker even charged us P50 each!! DENR pls take care if this issue. ‪#‎turtle‬ ‪#‎denr‬ ‪#‎animalrights‬

Pls spread this til it reach authorities.
‪#‎travelresponsibly‬ for everyone

Social media users said it was a form of animal cruelty.

According to a report published on Rappler.com, a team from the Department of Environment and Natural Resources (DENR) already went to Natago Beach Resort, but the sea turtle was no longer there.

"They said the turtle broke free from the rope maybe because it has been tied down for a long time already," Rachel Ann Dequilla of PENRO Guimaras told the news outlet in a phone interview.