By Coolbuster
May 31, 2015newsphototrending topicviral
The Bacolod City Police Office is conducting a probe on the alleged gang rape in a bar, the photo of which made rounds on social media recently.


SunStar reports that the BCPO Women and Children Protection Desk is investigating the incident where a drunk girl was allegedly molested by her drinking buddies during a "wet and wild" party at a venue situated at "Lacson Street."

WCPD chief Police Inspector Jinky Lou Ramos told the news outlet that they are still validating if the drunk girl is a minor and if the alleged sexual abuse really took place in Bacolod as there have been reports that it actually happened in Cebu "a long time ago."

Data as to the identity of the purported victim and the group of men who allegedly molested her are being gathered, she said.

In the viral photo, a man is seen kissing the private part of the girl while being surrounded by their fellow partygoers, a few of whom even took groufies to capture the scandalous scene. 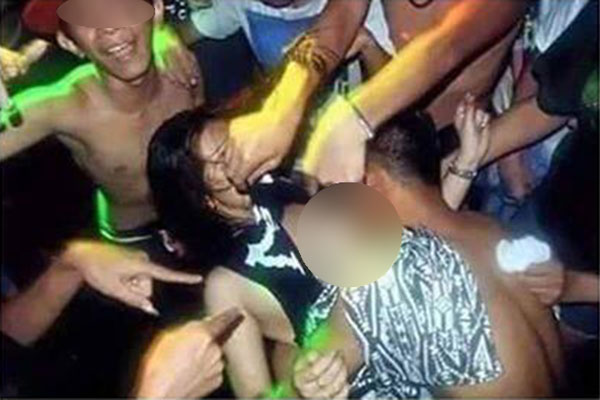 Some netizens claimed that everyone, including the alleged victim, was under the influence of intoxicating liquor when the reported gang rape happened.

Authorities consider the report as "alarming."

Parents are advised to check the activities of their children all the time to prevent a similar incident from happening, Ramos reportedly said.