By Coolbuster
May 11, 2015news
A Bohol-based triathlete dubbed as "Pinoy Aquaman" made history on Sunday as the first-ever solo swimmer to have crossed the Sarangani Bay. 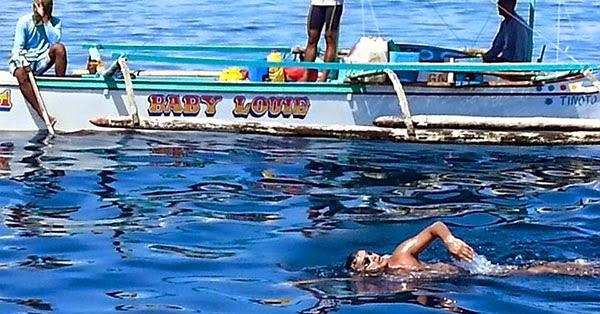 Posted by Ingemar Macarine on Saturday, May 9, 2015

Ingemar Macarine, who is also a lawyer, fought strong currents and big waves in his bid on Sunday morning to conquer a nearly 13-kilometer stretch of the bay from Maasim to Glan towns of Sarangani.

He covered a total distance of 12.95 kilometers in five hours and 55 minutes of swim, which was a record for a solo swimmer.

“It was one of my most difficult swims,” he said after the historic swim.

Macarine, who took off at around 6 a.m. at a portion of Barangay Tinoto in Maasim, said strong currents kept pulling him off course so he had to change direction at least 16 times.

But he persisted and was able to reach Sumbang Point in Glan at 11:57 a.m.

Sumbang Point is a place in Glan where Spanish navigator Ruy Lopez de Villalobos sailed in 1543 in search for provisions according to historical accounts.

“I’m so happy when I reached Sumbang because in a swim like this, there’s a possibility that were will not be able to reach our target,” he said.

Despite finishing the swim at Sumbang Point instead of the original route in Barangay Tango, a few kilometers away, Macarine still considers this swim a successful one because his intention was really to swim from Maasim to any point in Glan.


Macarine follows the marathon swimming federation rules, specifically the provision that prohibits the use of floating aids of whatever kind; the use of regular swim suits only; and, no physical contact with another human being or with the boats.

The average speed of Macarine, a pioneer in solo channel swimming in the Philippines, was 2.65 kph with a brief stop every 30 minutes for energy drink or feeding.

He initially paced himself but after covering 6.79 kilometers in three hours, his speed increased to 2.40 kph.

He constantly used freestyle and had no difficulty with his swimming techniques.

Macarine was escorted by two boats -- a small one carrying his navigator and a bigger boat loaded with reporters, rescue team and staff of the provincial government.

“He was calm and seemed just like practicing throughout the course,” said Tess Besana, videographer of the Sarangani Information Office.

Prior to his swim, Macarine took time to read the Bible and pray.

While swimming, he said he kept repeating Psalm 23 in his mind, and the thought of his wife and kids waiting for him to finish at the other side of the bay.

Macarine said the swim was his contribution to the local government’s continuing efforts to promote tourism in Sarangani Bay, which is known locally as SarBay, as well as the advocacy for clean seas and beaches.

“The swim was my own little way of contributing to the Sarbay tourism of your province,” he said.

He credited the swim to the support given by the provincial government, specifically Sarangani Gov. Steve Chiongbian Solon and his wife Michelle, who is the province’s tourism council chair.

Posted by Ingemar Macarine on Saturday, May 9, 2015

A native of Placer, Surigao del Norte, Macarine is presently based in Tubigon, Bohol.

He is currently the Commission on Elections election officer in Tubigon town.

Macarine has been participating in local and international triathlons in the past years.

He is the first Filipino to swim from Alcatraz Island Penitentiary to San Francisco City, California in the United States or 2.7 kilometers in one hour on April 7, 2014.

Before his Sarangani Bay swim, the latest in his 10 long-distance swimming feats was the Santa Fe, Bantayan Island to San Remigio, Mainland Cebu swim with a distance of 19.99 km in seven hours and 45 minutes last April 12, 2015.