By Admin
May 06, 2015newsviral
"Yes, I admit it. I am a proud member of the LGBT community," undefeated American champion Floyd Mayweather Jr. apparently said in an interview.


The pound-for-pound king cried after reading comments in social media as he revealed his long-hidden "secret." Mayweather, who recently won a welterweight unification championship match against Filipino boxing icon Manny Pacquiao, is gay - according to a hoax news that's currently circulating online. 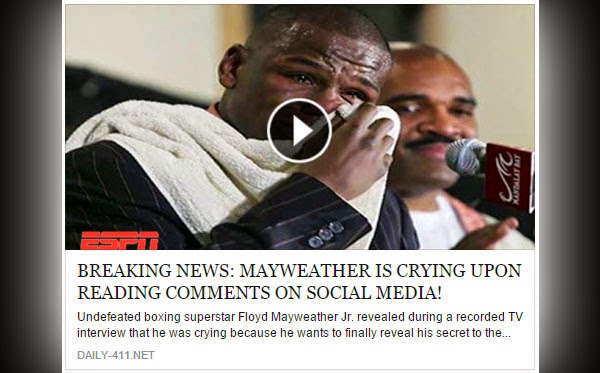 On Facebook, anyone who clicks the link to the article gets redirected to a website which contains a fake ESPN report.

To make it appear legit, the site shows a logo of the Showtime television network and some copy-pasted Facebook comments criticizing Mayweather. It even cited as source a certain Michael Kepley Jr. supposedly from the "ESPN Official Website."

If you happen to encounter a fake news story like what's shown in the screenshot, do not attempt to click the link. Otherwise you could fall victim to clickjacking.


According to International Business Times, clickjacking "is a technique used to trick online users into clicking hidden links and buttons. Scammers exploit the security weakness in web browsers to allow the layering and hiding of pages."

In this case, a suspicious link is revealed upon hovering on the Showtime logo, the search box, and the rest of the top bar as well as the fake Twitter and Facebook sharing buttons.

"Users will then be redirected to other pages that ask for personal information. These pages often encourage users to join a 'competition.' If information is entered, victims will be vulnerable to malicious software. Scammers will use their profiles to spread the scam online," IBT elaborated.

Beware of this scam. Think before clicking anything in the internet.