'Ingrate' Celia Veloso apologizes to public, not to Aquino

By Admin
May 06, 2015newsvideo
Celia, death row convict Mary Jane Veloso's mother who was tagged as ingrate by netizens, apologized to the public but not to the President.


In an interview aired Tuesday night on ABS-CBN's primetime newscast TV Patrol, the 55-year-old asked for understanding saying problems and stress may have pushed her to vent her frustrations toward Philippine authorities.

In a press conference after arrival from Indonesia on May 1st, Celia thanked their supporters and the people who introduced them to Migrante International, but aired her grievances against the government.

"We've returned home to the Philippines for payback. The government owes us because they tricked us," she said, according to various reports.

She also reportedly said President Benigno Aquino III should not be credited for the elevent hour reprieve that saved Mary Jane from death by firing squad.

"He is telling the whole world that he helped save my daughter's life. That is not true. Get ready, we are here to charge you. We will fight you," she added.

Celia's statement angered netizens, calling her ungrateful. A lawyer even said criticizing the President after his last-minute appeal was a "wrong move." Despite all these, a Palace official said the Chief Executive doesn't have ill-feelings toward the family. 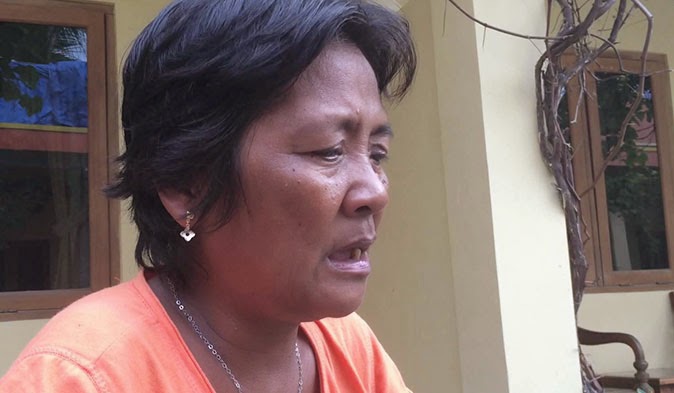 In a live interview with Anthony Taberna on the morning show Umagang Kay Ganda (UKG) earlier today, Celia insisted that she won't retract what she already said, but nevertheless hopes that they can still get public support.

She claimed that her family including Mary Jane previously thanked the President, the Vice President, and government agencies when they were still in Indonesia.

Meanwhile, her 59-year-old husband Cesar revealed that a number of people have apologized to them through Facebook. According to him, some netizens said sorry as they now fully understand what the family had been through.

Some social media user think otherwise. Here are comments from Facebook posted by netizens after the interview.

Eduardo Cabrera: "It is so sad that this woman has allowed herself to be used by those seeking political gains. She should just concentrate on saving her daughter and showing gratitude to those helping her. At the end, when those people have no use for her, they'll just drop her like a hot potato."

Shin Eun Millano Victorio: "We understand na hindi madali ang pinagdadaanan nyo but it doesn't mean that you put the blame on our president! remember we only have one president and be thankfull nalang kasi your daughter [was saved] from her near death! masyado ng maraming problem ang bansa para dumagdag pa kayo."

John Speropoulos Sr.: "A little late now .. You have shown your true colors.. No sympathy for you or your family."

Zenaida Navalta-wright: "Theres no excuse for ignorance. You thanked VP Binay, who himself, admitted he didn't talk to anyone about your daughter because he doesn't feel its appropriate to talk to anyone about your daughter in that summit, but the president broke the protocol and asked the President of Indonesia about your daughter. You thanked Manny Pacquiao, and everybody else but the Padre de Familia of your country. To make the matter worse, you even expressed you looking like a mad activist, talking about collecting from the government what they owed you, criticized and accused the president of taking the credit for your daughter's reprieved which you knew and everyone knew is a lie. Don't shed any tears, save it to appropriate time. Your daughter is not out of the loop yet. The government, yes, the same government is still working on how they can help your daughter to commute to life sentence instead of death., It is not going to be absolute pardon, because it still remains, that your daughter was caught with a drug in her possession. I don't know what you will say if and when your daughter will be coming home, probably arrogance again."